Ok, I have been thinking I need to devote a post to my poor, neglected Emmett. To be fair, this is a homeschooling blog and I'm documenting the beginning of actively homeschooling Max... but my other kid is pretty neat too. Today is Emmett's half birthday - he's 18 months old! In some ways it feels like he just got here a few days ago, and in some ways it seems like he's been a part of our family forever. He is a sweet little thing... as a baby he was much more laid back than Max was, but he is now entering that phase of frequent tantrums, due to his intense desire to communicate, but limited ability to do so. I remember reading or being told somewhere that the "terrible twos" are really more like between 1 1/2 and 2 1/2, and it sure feels like we are there. He climbs EVERYTHING. Turn your back for a second and he is standing on the dining room table giving you an impish grin and making a guttural "HAAAA HAAAA HAAAAAAAA!". He can run unbelievably fast on those little legs now. And why is it that small children have a need to take everything out of everything? The contents of every cupboard, every drawer, every toy container must be emptied out and dispersed around the house. I have pretty much given up on cleaning up behind him - it's an exercise in futility. I basically let him trash the house and tidy it back up when he's sleeping. It's much better for my mental health that way. He's beginning to enter what I thought of with Max as a "learning explosion." He learns new words and skills every day. He stubbornly insists on feeding himself now and wants no part of being spoon fed anymore. It's messy, but he's getting better at it. Also, he's saying quite a few words now:

Ma-Ma
Dah-DEEEEE!
Dog-dog = Dog
Ba-Ba = Bottle
Teeez = Cheese! He says this both in response to having a camera pointed at him, or the food being offered to him.
Tookie = Cookie
Bubba = Brother
OP! = Stop! He says this whenever I'm doing something he doesn't want me to do - namely changing his diaper.
Ow! He learned this during his hospital stay.
Hello! He says this whenever he picks up a phone and pretends to talk on it.
Bye! He has said this just a few times, and refuses to say it when prompted.
Cah = Car. He has also said this just 2 or 3 times and refuses to say it if prompted.
He also meows at the cats and barks at the dog. Actually if meowing counts, that would be his first word.

He is developing quite the temper when he doesn't get his way - he had a complete meltdown the other day because he couldn't fit his sippy cup through the door of his toy school bus. Usually I take these tantrums as a sign that he's tired and ready for a nap. He is still napping twice a day, mostly, but the times vary depending on how early or late he wakes up in the morning. Basically after 3 hours or so he is hitting the wall. It makes it difficult to make plans because I'm never sure when he'll be sleeping, but it has always made more sense to me to let the kid's natural schedule dictate things than try to impose an artificial one based on convenience to me. When he gets down to one nap consistently, it will make my days more predictable, but I will only get one break instead of two - so there's always a trade-off.

My favorite thing about Emmett is watching him with his brother. They are so amazing together, so connected, and they genuinely enjoy each other's company. They cuddle and hug and give each other kisses. Em is finally old enough to really be a playmate to Max and they do play together quite well for the most part. The train table is hands-down the best toy in the house, for all ages - they spend lots of time playing trains together now. 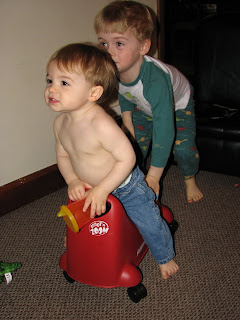 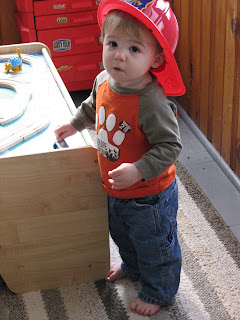 That being said, I wish Em would slow down with all this growing up already! I love those pudgy baby cheeks, and hobbit-like feet, and chubby legs. I love the baby giggles and grins and squeals. I love holding him close and smelling his hair and putting my cheek against his... but he rarely wants to cuddle with me anymore, always squirming to get off my lap and go play (although he never wants to be very far away from me). Slow down little man!
at 1:19 PM