A new learning exprience for the whole family... CHICKENS!

After doing a lot of reading and talking about wanting to do something to be more self-sufficient and more connected to where our food comes from, Shane and I decided that this year, we wanted to acquire a flock of chickens.  Of course that decision led to more reading, and Shane dove in in full force.  I got a pile of books from the library and Shane's favorite by far was this one.  He liked it so much that I bought a copy to keep on hand as a reference.

So, after asking around for recommendations for a reputable hatchery, we chose to get our chicks from Meyer Hatchery in Polk, Ohio.  After much research, we decided to get six birds each from three breeds:  Australorps, Buff Orpingtons, and Dominiques.  We were looking for breeds that were both docile/friendly and known for being good egg layers.  Not quite two weeks ago, the kids and I drove out to pick up our 18 little balls of fluff.  It was a scenic drive and we passed several Amish farms on the way.  We were actually behind a horse and buggy on the way home, to the kids' delight. 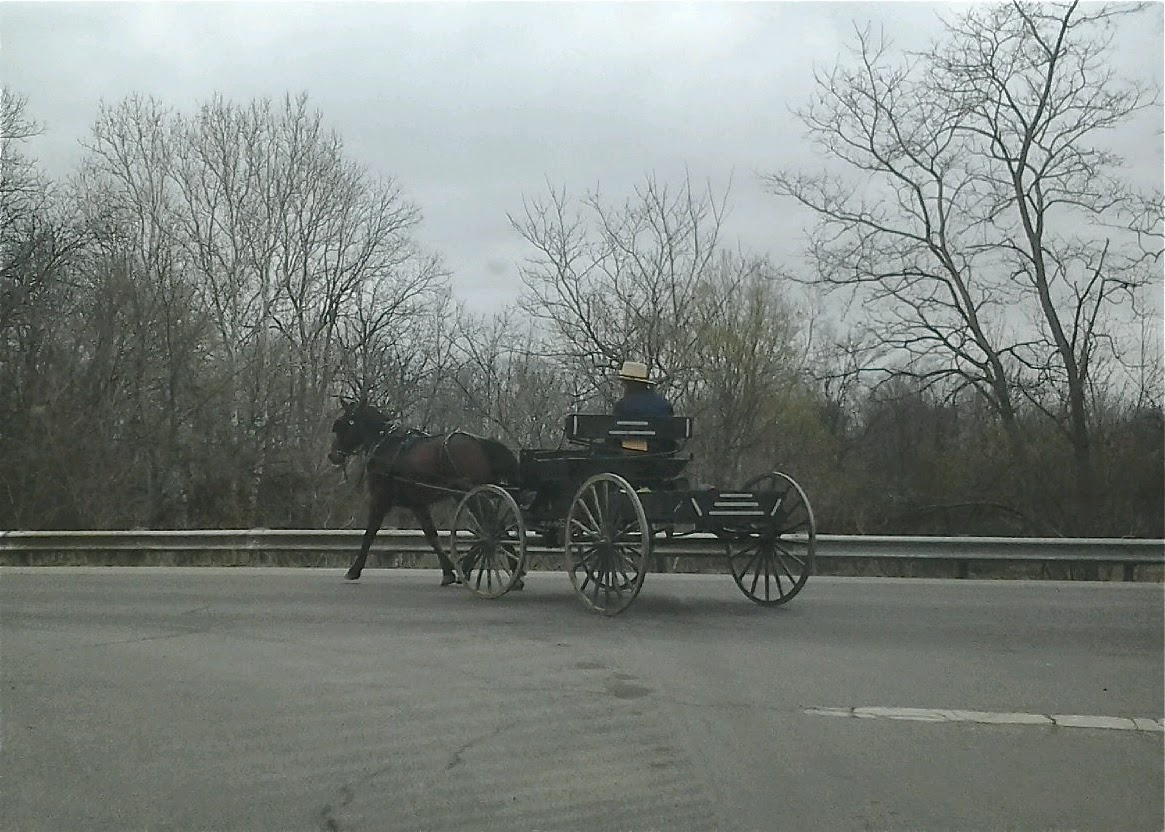 So here are the chicks on the day we brought them home: 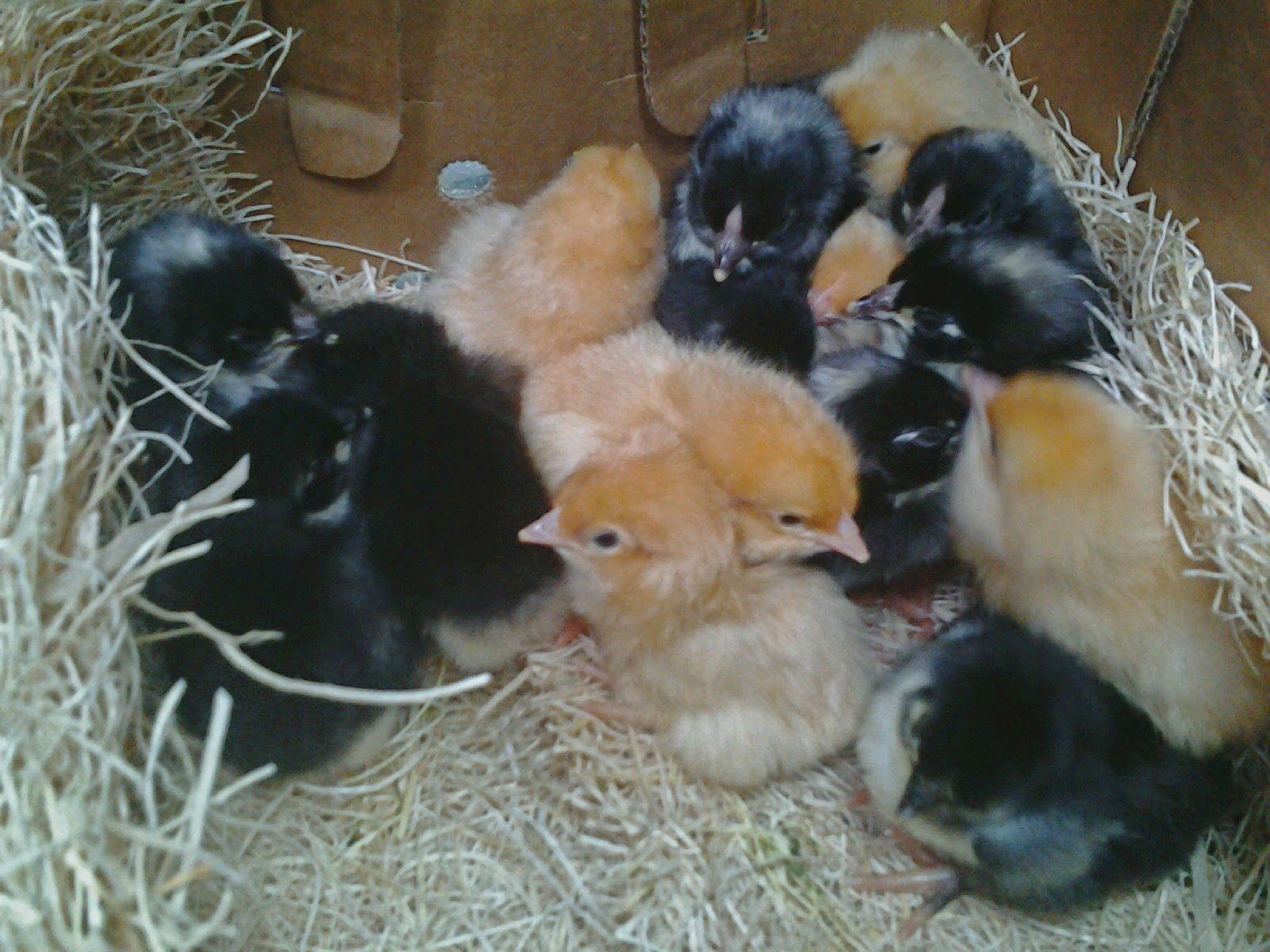 We have all been enjoying their company immensely.

They are currently in a brooder in the basement that Shane built out of some heavy-duty cardboard that he brought home from work.  They have a simple heat lamp keeping them toasty and a feeder and a waterer. 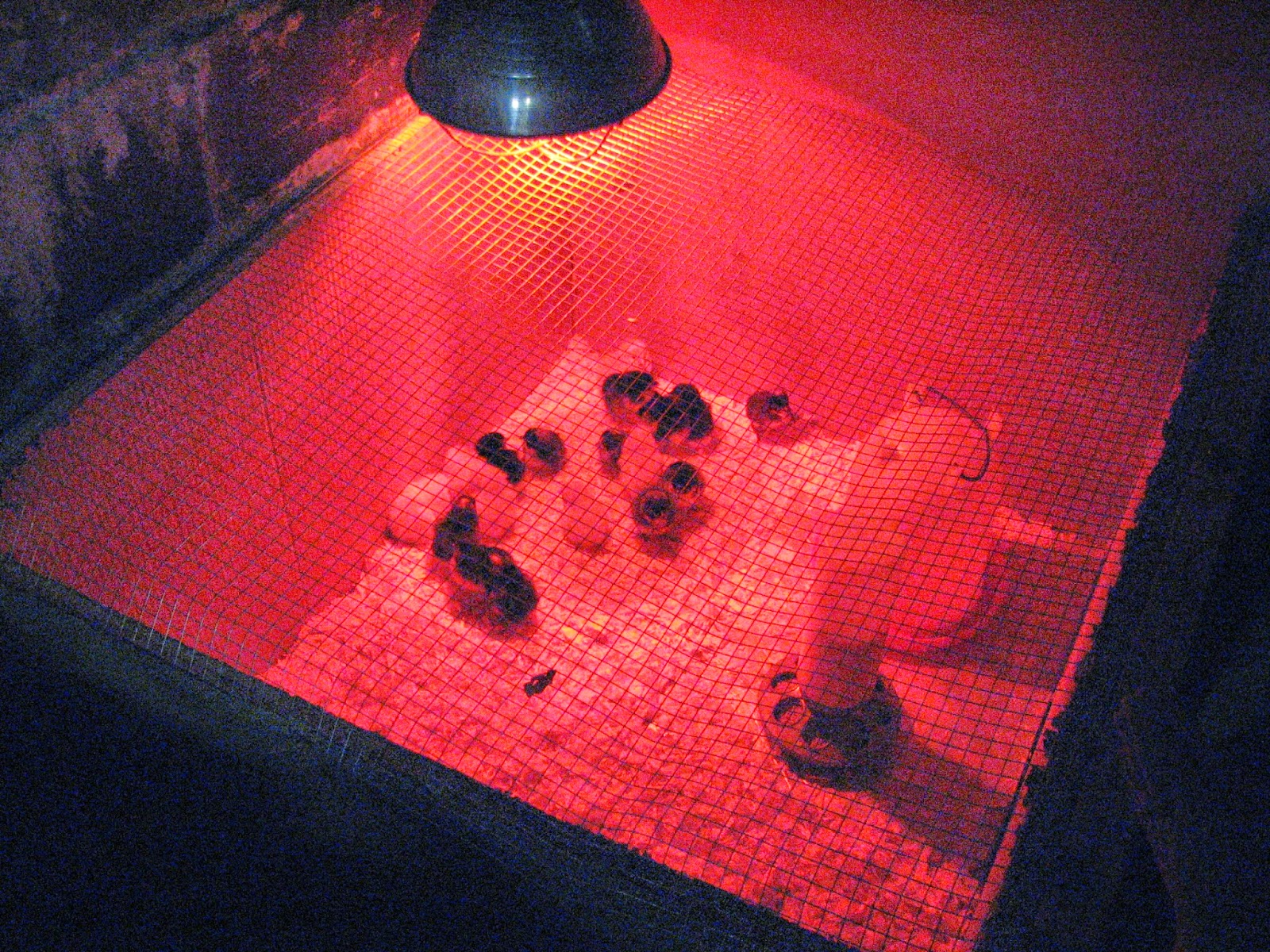 So far, they're pretty simple to care for.  I go down once a day and change their water and refill their food, and just hang out and hold them for a bit so they will be used to human contact.  Shane has been excitedly catching bugs and worms to toss in to them as treats and they go nuts over them!  He also tosses in occasional handfuls of grasses and dandelions too.  For a few days a few of the chicks had some poo stuck to their butts and we had to wash them off with warm, soapy water (yeah, a little bit "eww") but then Shane read that if you give them greens you should leave the roots and dirt on them, which the chicks will also eat.  This provides grit to aid in digestion and proper non-sticky poops, and we haven't had any more issues with that in a week now.

Meanwhile, Shane has been busy working on creating their home.  He's converting a decrepit old shed that has been on our property since we bought it 14 years ago.  It sat on a decent concrete pad, but had crumbling particle board sides.   Also the roof was so low he kept hitting his head when he went inside, so he decided to move the whole frame off of the concrete base, have a friend lay two courses of block, move the frame back onto the block, and put new siding on it.  I didn't get a perfect "before" shot - the first two were taken after the frame was moved off the base. 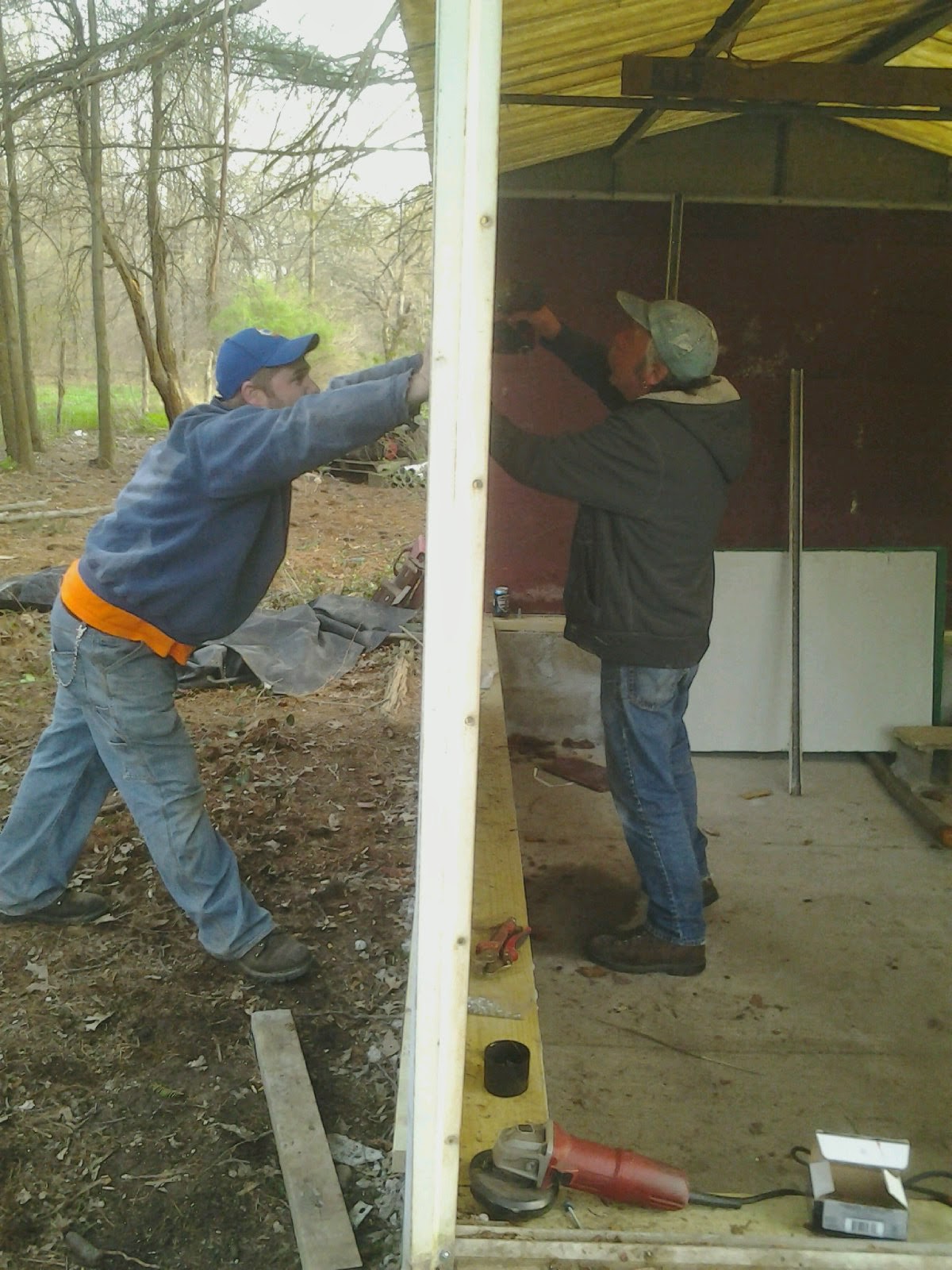 And now, here is the current state of the chicken house, after this past weekend's efforts.  He still has to make the man door and chicken doors and ramps, install the nesting boxes (which are built, but I don't have any pics of yet) and roosts, and securely fence in the runs.  Plans include two or three separate runs that we will rotate usage of. 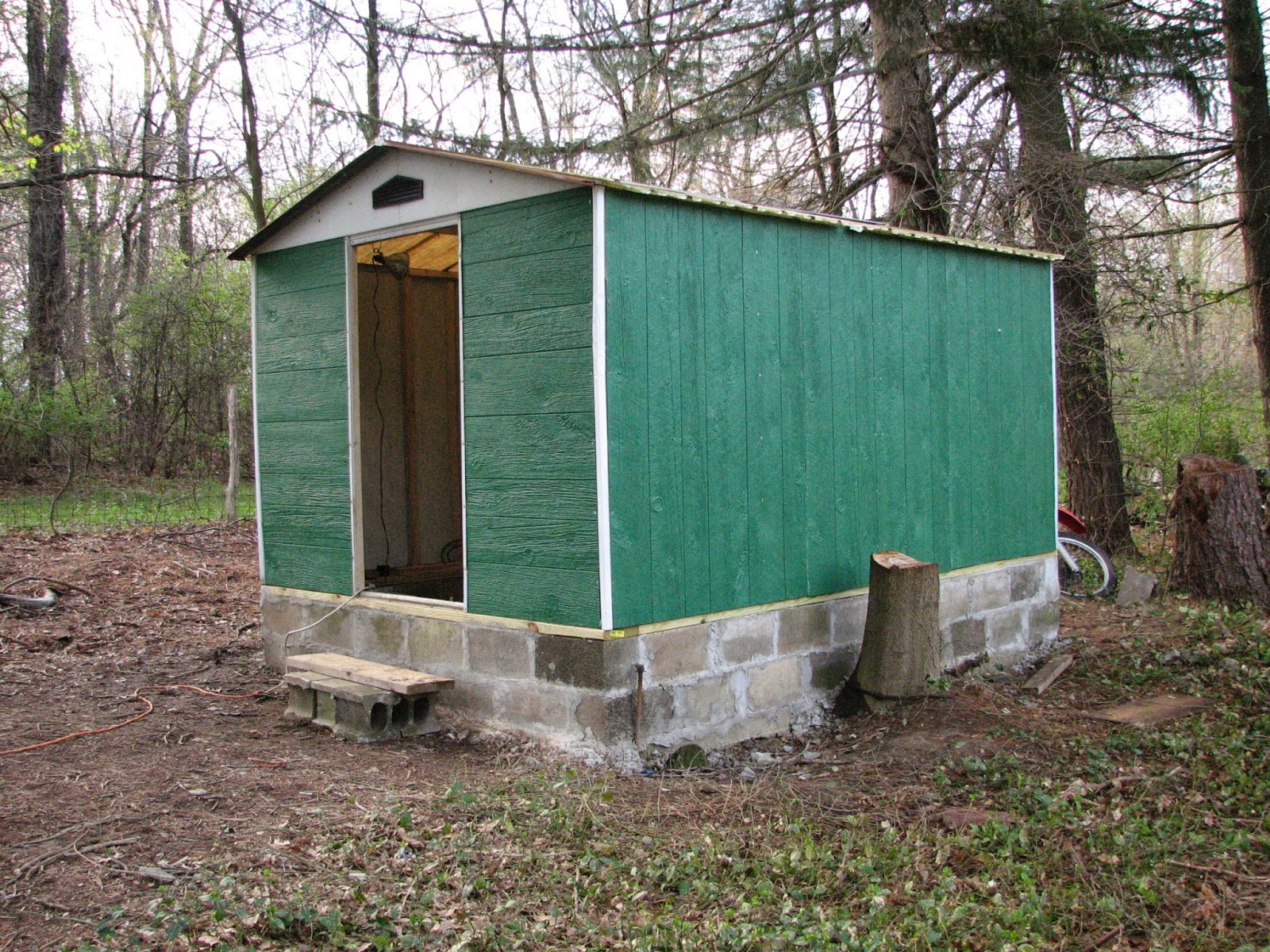 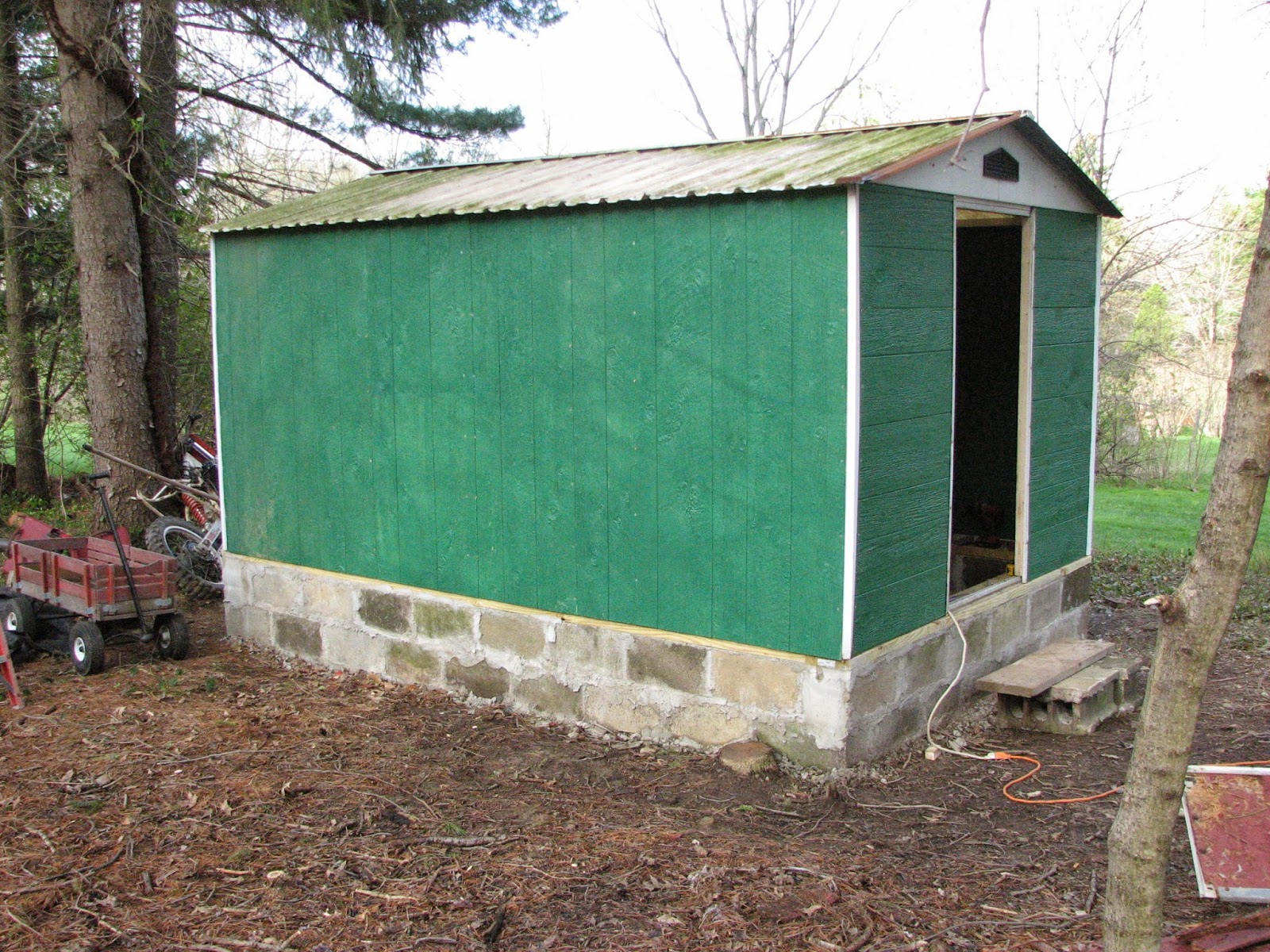 It has been great fun throwing ourselves into this project, and it's amazing to witness the daily growth and development of the chickens.  We bought the chicks unsexed, so we don't know how many boys vs. girls we have.  The plan is to keep one or possibly two roosters, and all of the girls, and the rest of the roosters are going to become food.  I will admit that this is something I feel a bit squeamish about, however, I know that every time I eat chicken, an animal had to meet its end somewhere... and this way we'll at least know that they had a free and happy life, rather than spending their entire existence inside a huge farm standing shoulder to shoulder with other chickens in a living space the size of a sheet of copy paper.  Shane seems pretty confident in his ability to perform this task, and we have some knowledgeable friends and family who will probably help him out the first time.  I haven't decided if I will be present for that or not... I feel like I should be here for moral support, at least, but I may end up choosing to stay with the kids at Grandma's house instead.  Not sure yet.  I will continue to update on our progress in this adventure!  Oh, and here are two last pics, just taken this morning.  You can see they've already grown quite a bit in their 13 days here - they now have feathers on their wings and tails, and they're quite a bit bigger too.  They are really sweet and funny little creatures. 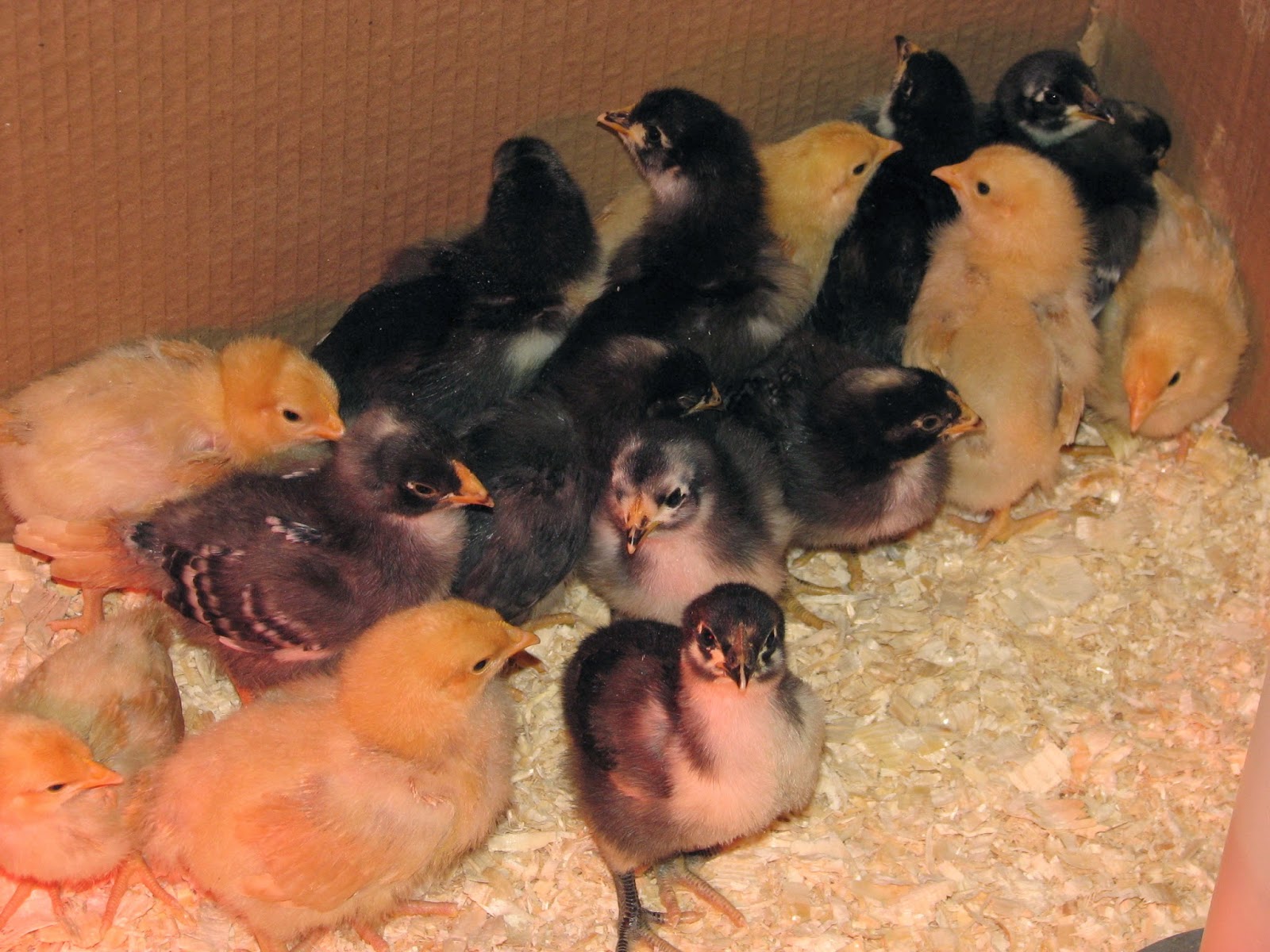 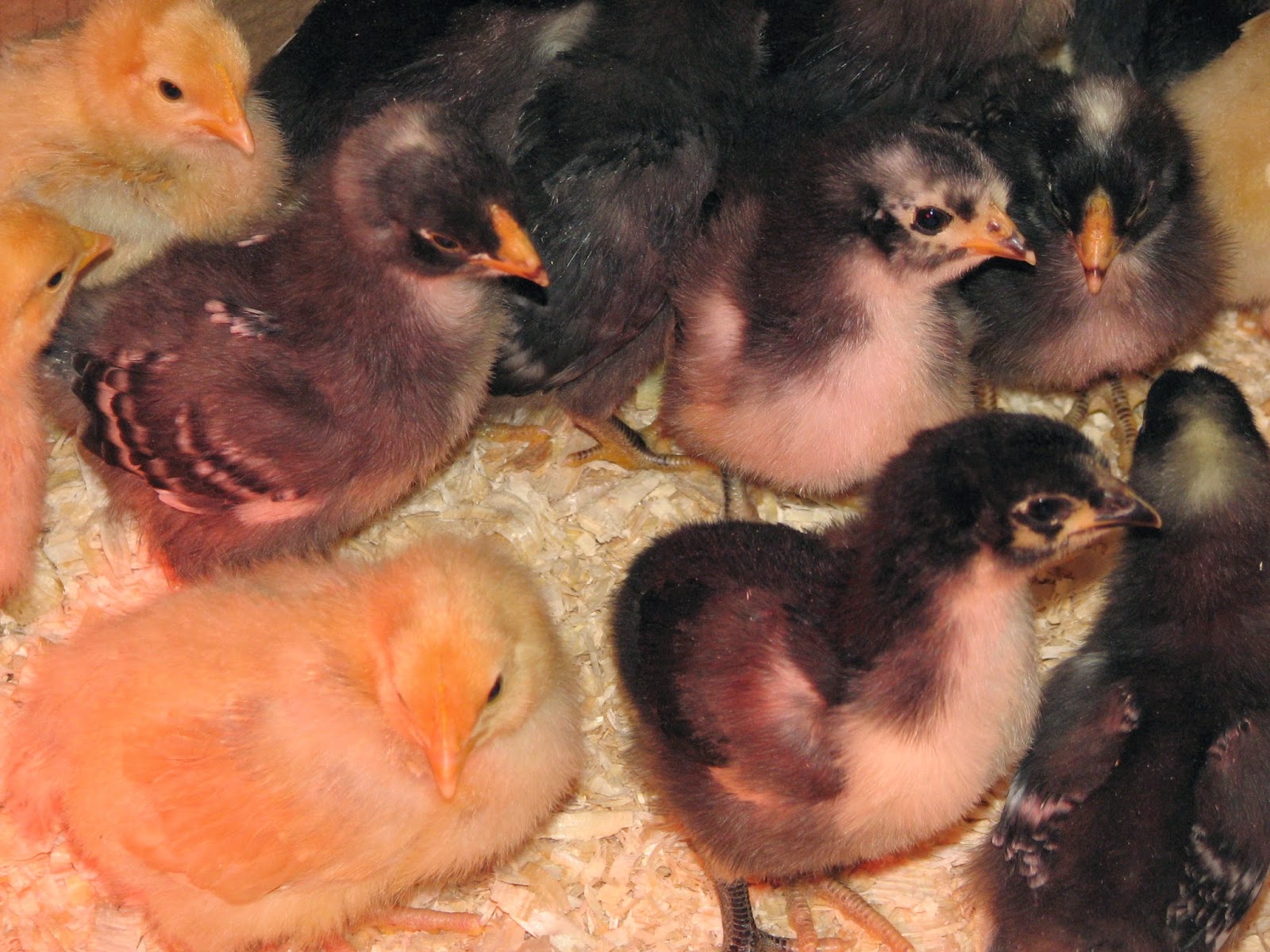 We will be including the kids in the responsibilities of caring for them and collecting eggs each day, which will hopefully help them make a connection to where their food comes from, besides the grocery store.  So far, it's a wonderful learning experience for all of us.
at 2:21 PM 0 comments