Just a quick funny bit that I want to record...

This year was Monkey's first time playing a team sport, and tonight was his baseball team picnic.  It was held at the local park, and after letting the kids play for a little bit, the coach called everyone in to partake of the potluck dinner.  He announced that it was time to say grace.  Inwardly, I cringed.  I realized that this is something that Monkey hasn't been exposed to much, since we obviously don't pray and the times he's been around it at other places, he didn't really notice what was going on.  I made eye contact with Monkey and signaled to him to be quiet.  In my head, I was thinking, please don't talk during the prayer, please don't talk during the prayer, please don't talk during the prayer.  The coach rambled on for a few moments:  "... blah blah blah... the shed blood of Jesus Christ..." Oh no, he said blood.  Monkey will certainly notice and comment on that!  "..blah blah blah... amen."  Whew!  We made it!  Got thru the blessing without incident!  Yay!

And then Monkey said, loudly and clearly,  "WHAT DID WE HAFTA DO THAT FOR?"

Facepalm.  For just a beat, it was silent, but then Shane & I laughed and then everyone else did too.  But it was definitely a little awkward.  Ah the joys of being a nonreligious person in a small and very religious town.  Monkey had a great time though, and was beyond thrilled to receive his first ever trophy! 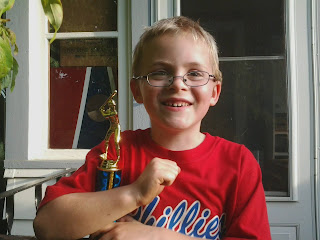 Later this evening, we did have a conversation where I explained what was going on.  I told him it's just something religious people do before they eat to be grateful for the food they got to eat and the people they got to be with, which is a nice idea.  And that next time it happens, to just be quiet and respectful and wait for it to be over and don't say anything.  He said, "Okay, Mom."  So, that was today's learning moment.
at 1:25 AM 0 comments