Back in June, we visited an amazing place - The Little Buckeye Children's Museum in Mansfield, Ohio.  I've been meaning to write a post about it because I wasn't able to find much in the way of information / pics before we went, and I feel like it's a hidden gem that needs to be shared.  I was absolutely blown away by the place.  Every part of it was so thoughtfully designed, so inviting, and so full of imaginative play potential.  Apologies in advance for the quality of the photos - I only had my cell and was regretting not bringing the good camera with us.  But hopefully this will help give you an idea of the size and scope of the place.

The first thing you see when you enter is this cool and fun musical instrument made of PVC pipes.  You slap the openings with pieces of foam to make various tones. 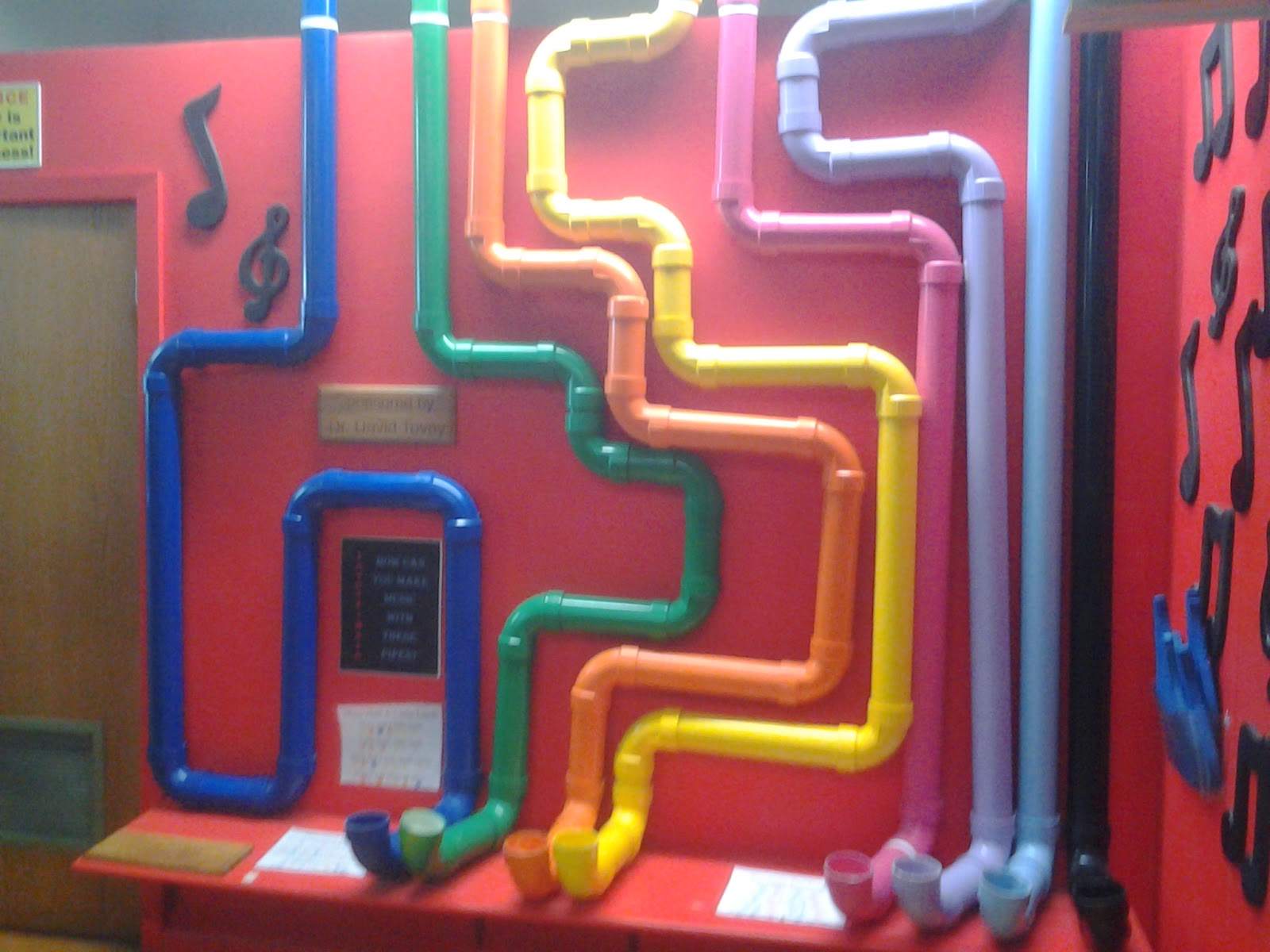 Next you come to a play area with a dinosaur dig, a cave, and an treehouse-like upper balcony.  Here you can see Bug disappearing into it.  The cave is pretty dark inside, and there are flashlights available for the kids to take inside and "discover" paintings and fossils on the cave walls. 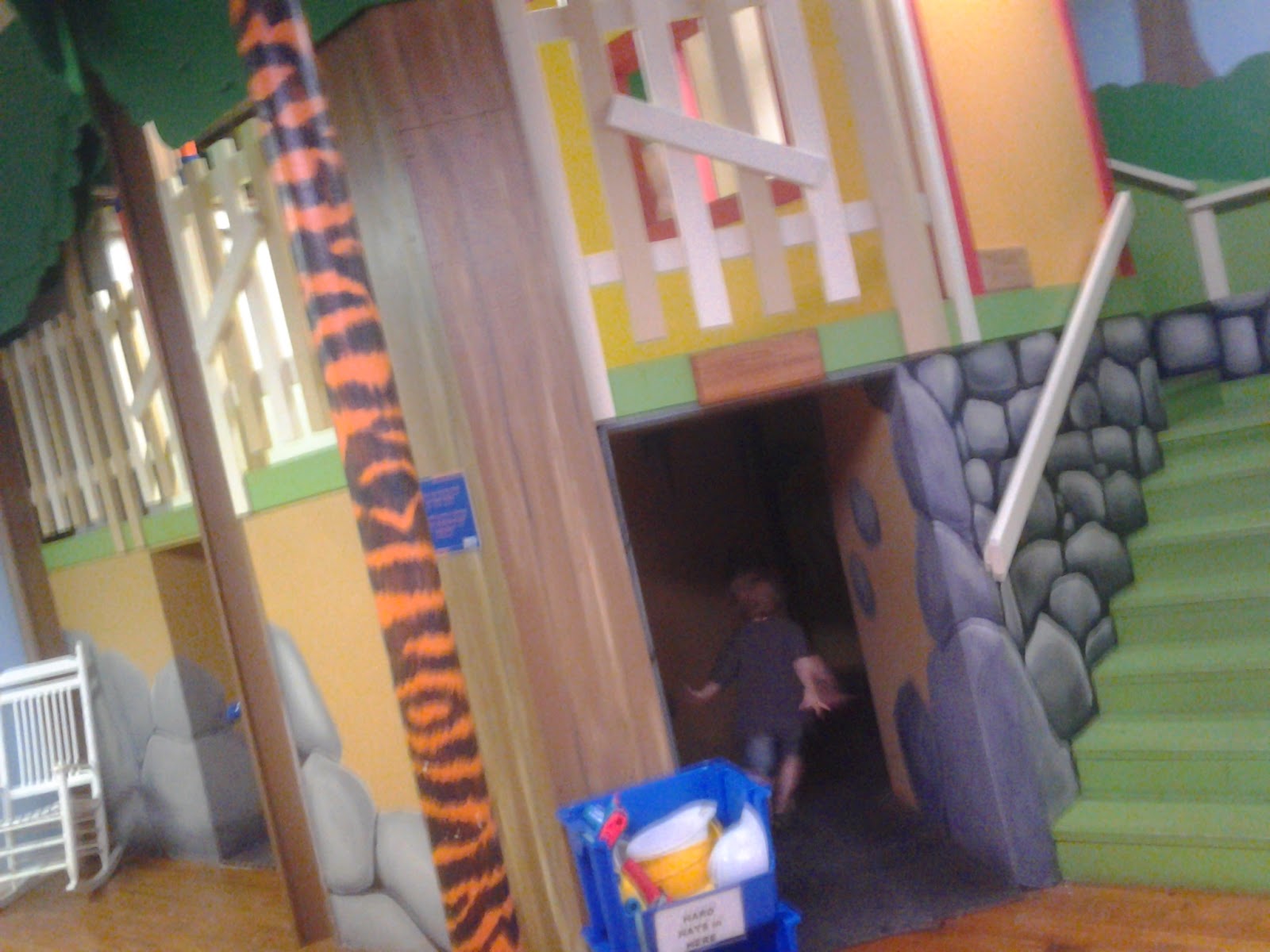 Next begins a miniature city street with play areas for all different parts of the town. 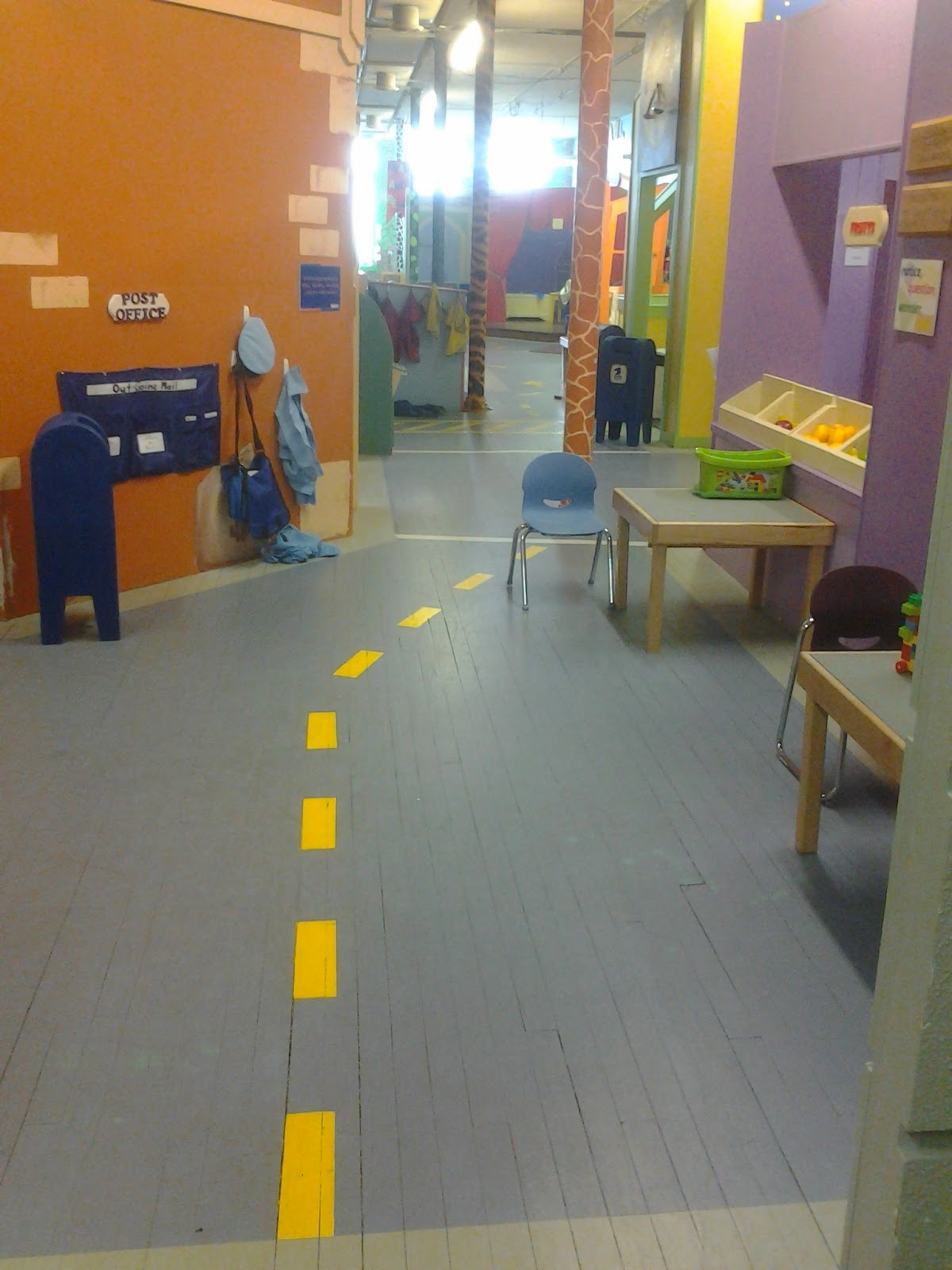 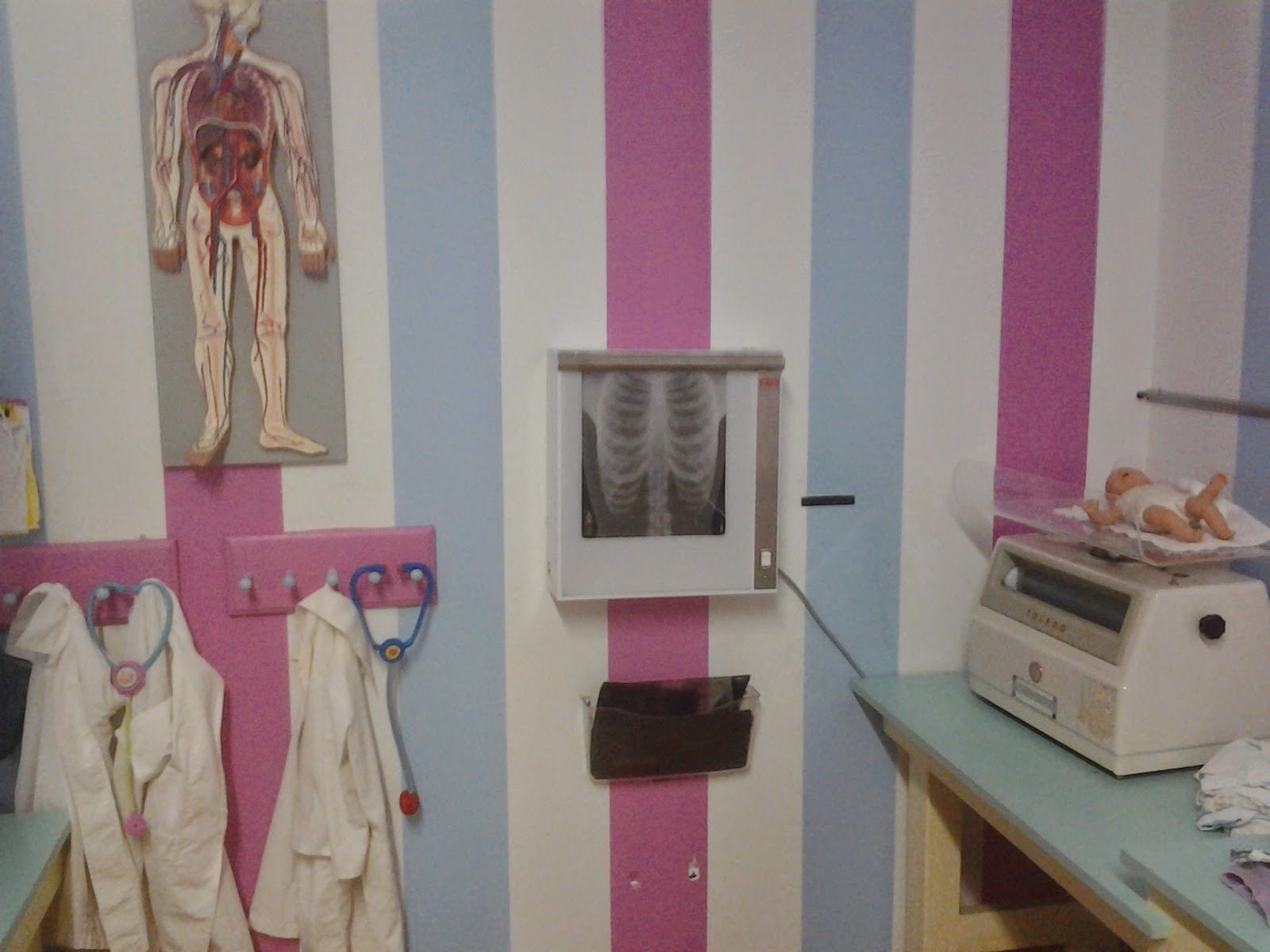 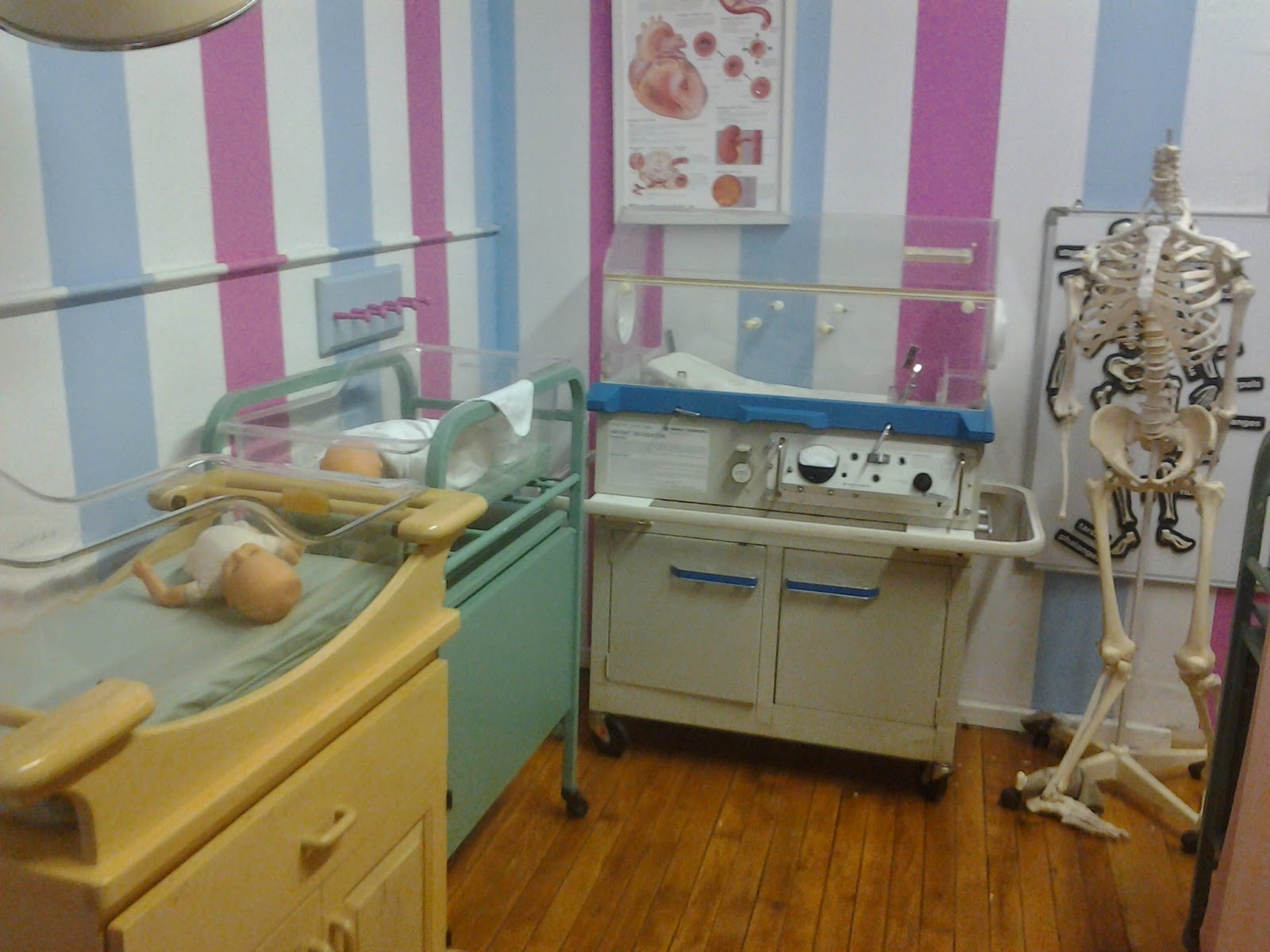 And next, the Little Bank, complete with working pneumatic tube system for the drive-thru.  The kids spent a long time playing here. 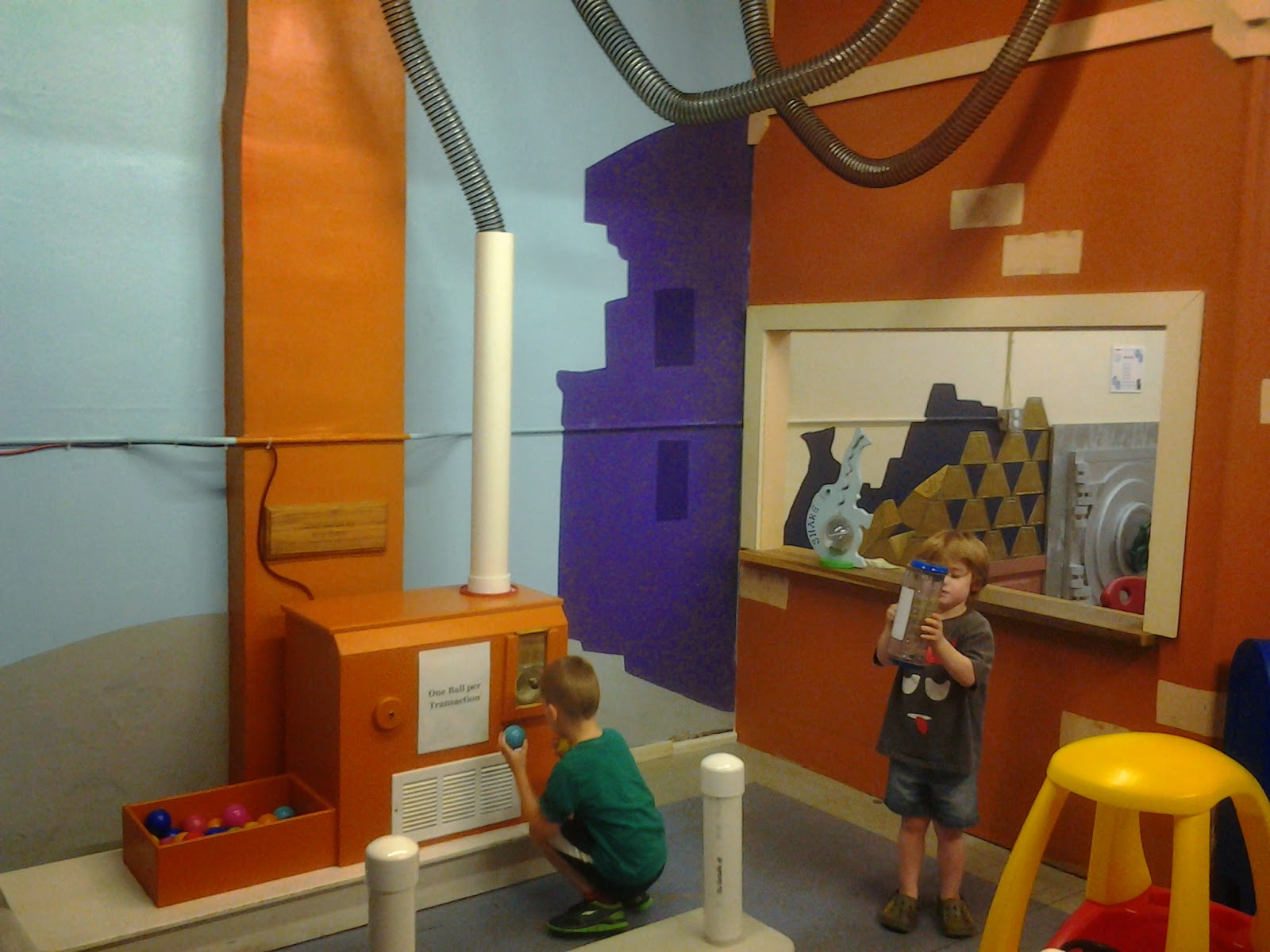 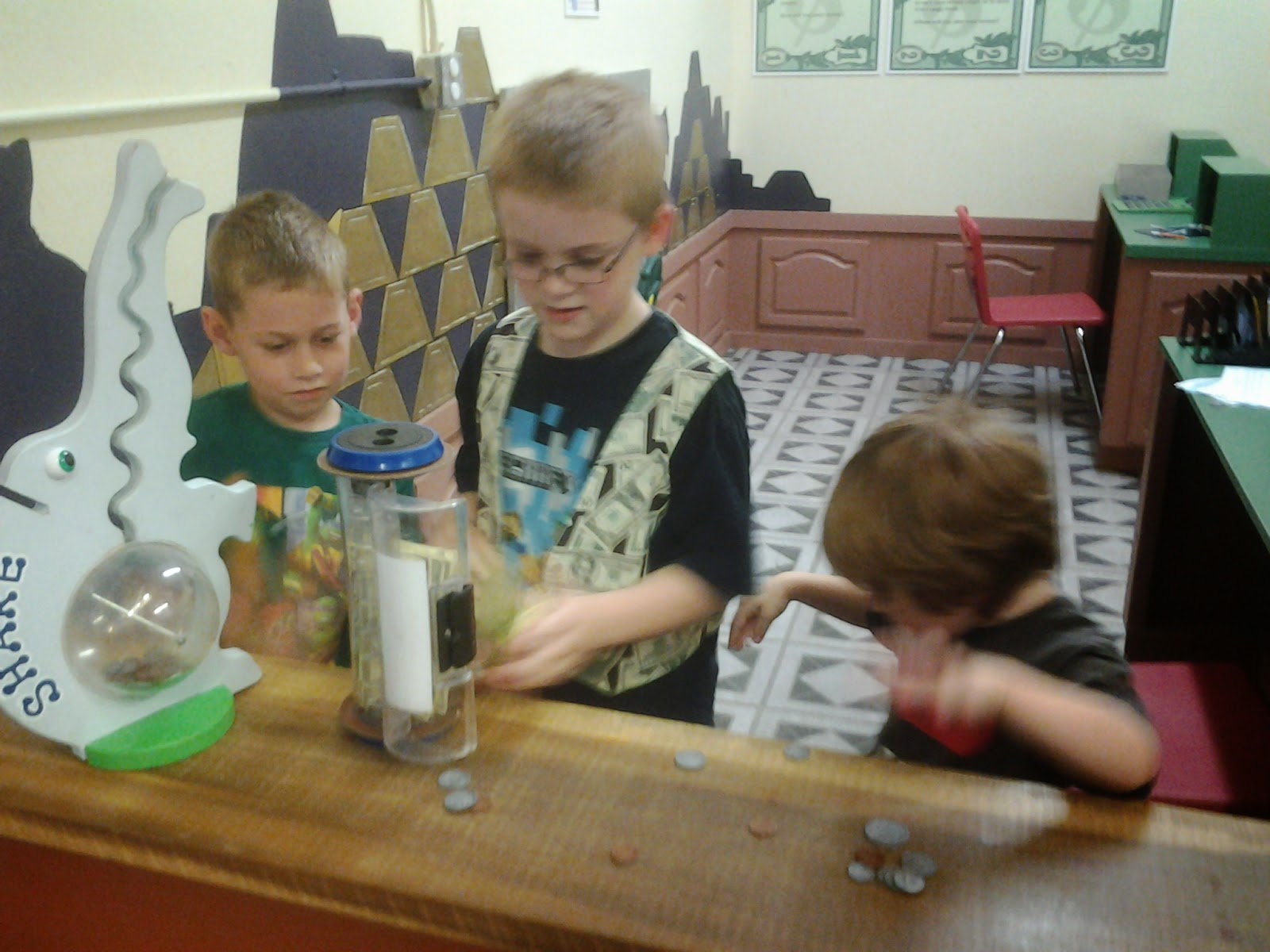 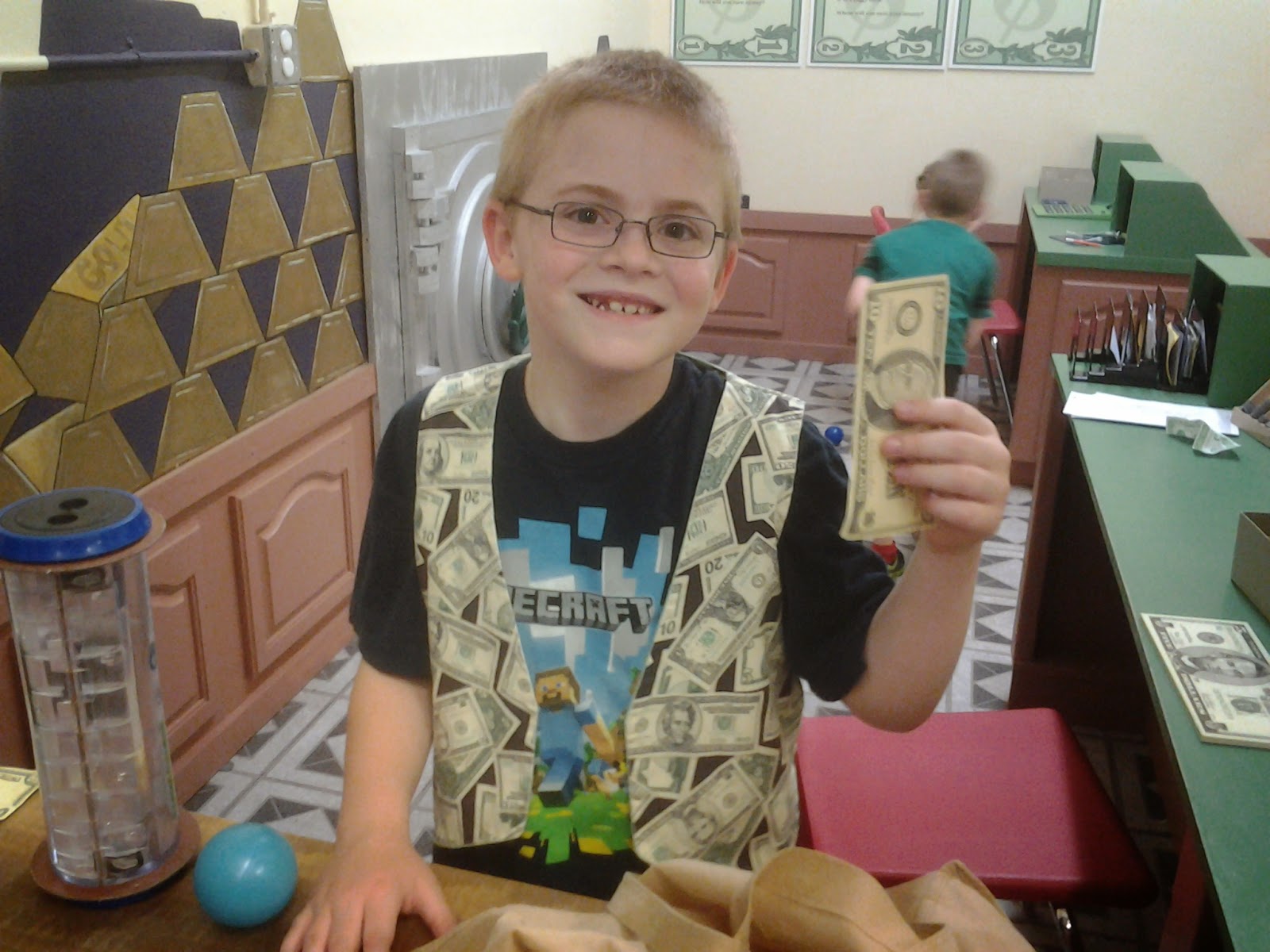 The Birds and the Bees, or My Kid Says Hilarious Stuff

I must record a few recent conversations for posterity.  One night last week, we were having one of our bedtime chats, when Monkey said, "I'm never going to have kids."  I was surprised to hear this, because he LOVES babies and little kids.  I said, "Really?  You don't want to be a Dad?" to which he responded, totally matter-of-factly, "Well, I have no idea how to breed!"  (He is thinking in terms of "breeding" because he's been playing a game called Dragon City where you collect dragons and breed them to make new dragons.)  I couldn't help laughing, and I told him not to worry, that he'd figure it out eventually.  I then reminded him that we've read It's Not the Stork! about where babies come from, and promised to re-read it with him soon.  At some point in the discussion, he said to me, "If you and Dad are gonna breed, make sure to tell me.  'Cause I might wake up in the night and... [grimace]" (which would seem to indicate that he understood at least a *little* about breeding).

Fast-forward to this week.  We re-read It's Not the Stork.  Twice.  This was also Bug's first encounter with the book.  Both kids found it fascinating and kept interrupting to ask questions.  Both were especially fascinated by the umbilical cord and Monkey asked, "Wait.  If the cord gets cut when a baby is born, how can more babies be born later?"  (A good question, I thought.)  So I explained about placentas and how each kid gets a new one.  Overall, a fun and interesting read that prompted good discussion with no awkwardness or discomfort at all.  Next we moved on to read "You Are Stardust" which Monkey particularly enjoyed.

My husband rocks! Or, A New Bed for the Boys!

So, my kids have wanted a bunk bed ever since they got to sleep in one on vacation a couple years ago.  Unfortunately our near-century home has very low, sloped ceilings and a normal sized bunk bed would never fit in their room.  But then I saw some amazing examples on blog posts and Pinterest of how people got creative with IKEA's Kura bed, so I checked the measurements and realized it would actually be a perfect fit.  The $199 price tag seemed pretty reasonable too. 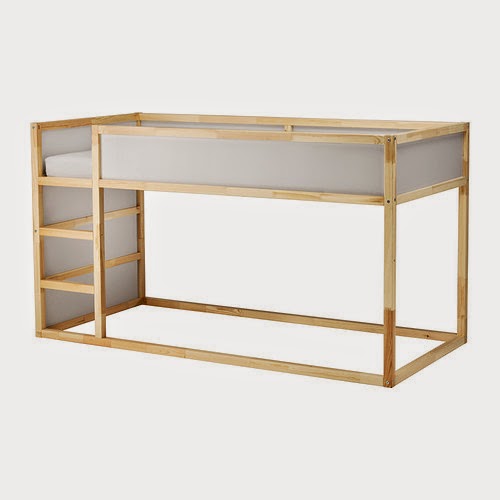 However, as soon as I showed it to my husband, he said what he always says - "Pssh, I can build that!"  So it's been on his very long to-do list for months.  This past Friday, while perusing our local buy/sell/trade Facebook page (if you recall, that's where I scored our awesome lockers), I came across a posting from someone who was selling this loft bed in barely-used condition for $75.  I showed it to him and asked if it might be easier to modify this one than to build a whole bed from scratch.  He said yes and we liked the price, so we picked it up the next day.  That was Saturday. 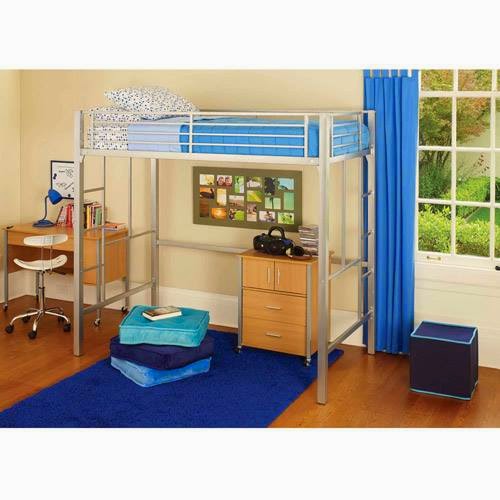 Tonight (Tuesday) he came home from work and tackled the project in just a couple of hours.  We installed it in the boys' room and *poof* project complete.  Sorry I don't have an actual tutorial for you, but he basically popped the plastic caps off the bottoms, sawed off the legs to make the bed the right height, and popped the plastic caps back on.  He adjusted/reinforced/welded a couple other spots on the frame to make up for what he had cut off, and that was it.  So we basically ended up in a sturdier version of the IKEA Kura bed, for less than half the price - and we only had to drive about 10 minutes to pick it up versus the hour-plus drive to the IKEA store.  I am super pleased with it - he did a great job. 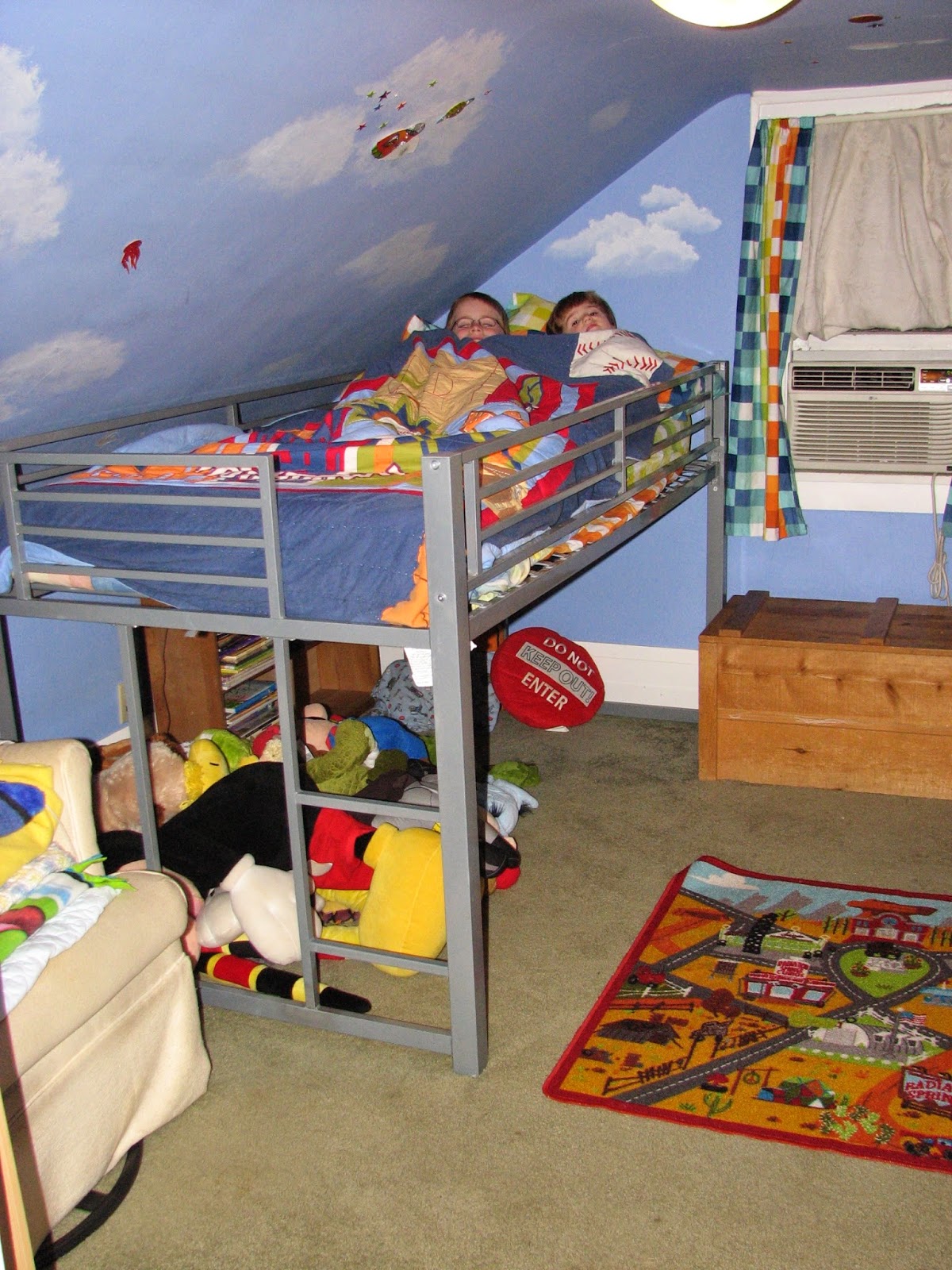 We still need to get a second mattress for underneath, but for now it's a cozy little play area/reading nook.  The boys are loving it - way to go, Daddy! 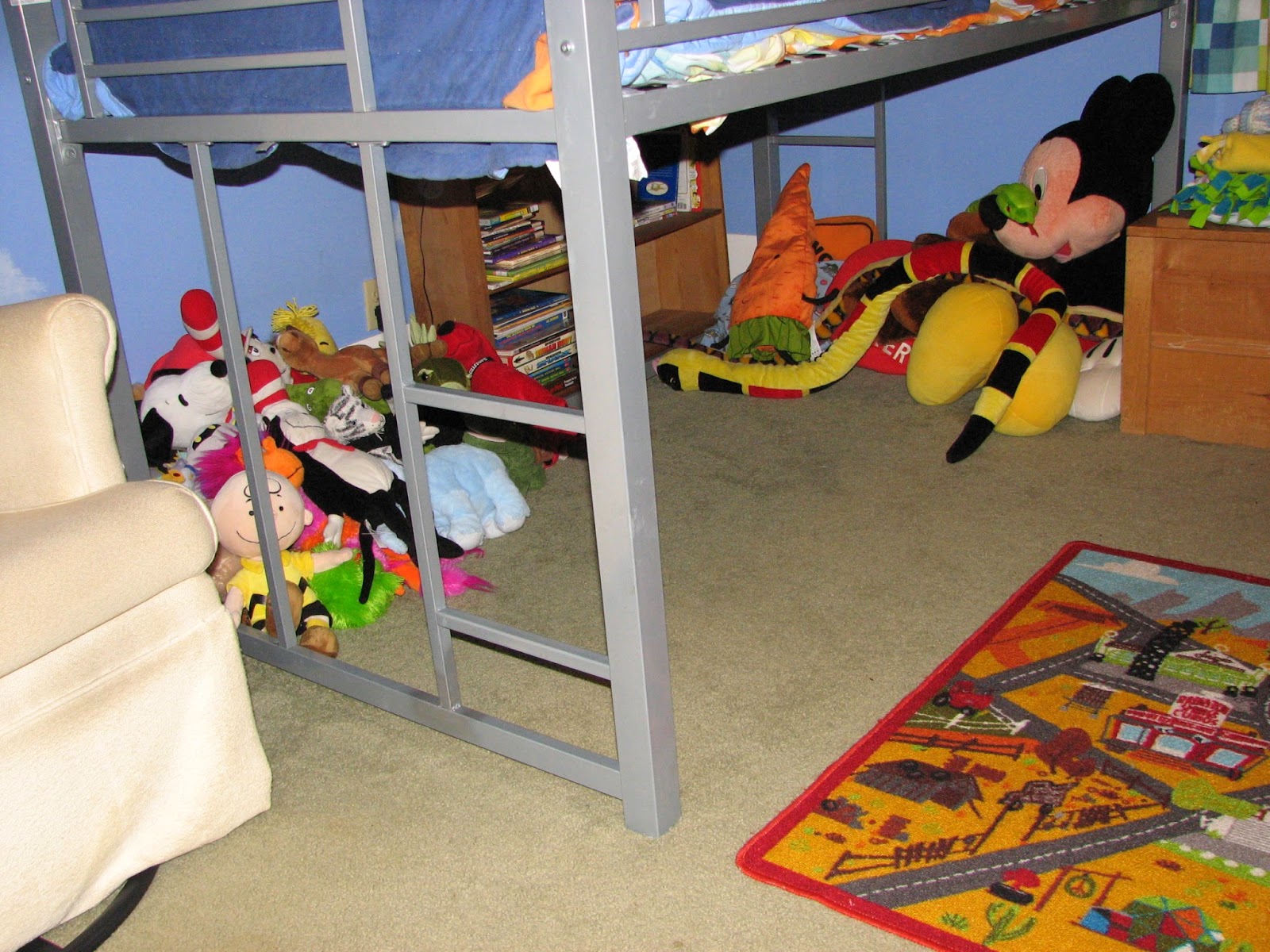 Email ThisBlogThis!Share to TwitterShare to FacebookShare to Pinterest
Labels: bargain hunting, DIY, Pinterest-inspired, this has nothing to do with homeschooling
Newer Posts Older Posts Home
Subscribe to: Posts (Atom)