Can you spot the misspelling here? 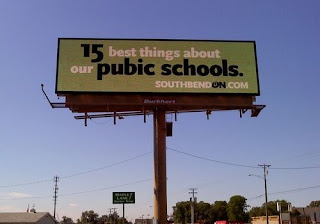 Hmm. This sign doesn't exactly inspire confidence in the public school system, does it? :)
(via neatorama)
at 9:58 AM 0 comments

I just want to write this down quick so I remember it - Max made up his first story ever tonight. After watching "Honey, I Shrunk the Kids" (again) this evening, I asked Max if he would like to shrink himself real tiny like those kids in the movie did.

Max: "Well I was real tiny when I used to live in your belly."
Me: "Oh really, you remember that?"
Max: "Yeah, and I didn't want to come out of there 'cause it felt really nice in there."
Me: "Oh really?"
Max: "Yeah and there was another tiny baby in there too. He was a lizard. He had tiny feets. My tiny feets were bigger than his tiny feets."
Me: "Hmm. What was his name?"
Max: "Cracky." (That name comes from his name for scrambled eggs. He calls them "cracky eggs" because I crack the eggs into a bowl to make them.)
at 11:23 PM 0 comments

Email ThisBlogThis!Share to TwitterShare to FacebookShare to Pinterest
Labels: Kids say the darndest

Patting myself on the back just a tiny bit...

So in our local paper, The Post, they have a relatively new feature: Guest Columnist. You can write 750 words or less about whatever topic you want, so I submitted a column about homeschooling. And they printed it! I pretty much just cobbled the article together from my first couple of posts on here - this blogging thing really helps me organize and clarify my thoughts. But it was really exciting to see my name in print! 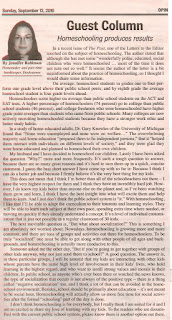 Email ThisBlogThis!Share to TwitterShare to FacebookShare to Pinterest
Labels: patting myself on the back, why

When I got home from work the other day, my 4-and-a-half-year-old son, Max, came running to meet me at the door and held up two plastic dinosaurs he was playing with. "Look Mom, this Allosaurus is biting the tail of this Parasaurolophus!" Wow! I am constantly amazed at the stuff that comes out of that boy's mouth. Another time, a few months ago, he was attempting to stall for a few extra minutes before bed, so he said to me, "Mom, I have to ask you something... *pause*... what species lived in the Jurassic?" I wasn't sure whether to be more amazed that he asked that big question, or that he asked it because he knew it would have a very long answer and would therefore delay bedtime! As you can see, he currently has an obsession with all things dinosaur - and he is an absolute sponge for information, if it's something of interest to him. He can correctly identify lots of different species, and I didn't teach him any of them. He simply absorbed the info from his favorite cartoon, "Dinosaur Train" on PBS. This leads me to think about how we are going to actually "do" homeschooling. My function in his dinosaur "education" if you will, is to simply remember when his favorite show is on and let him watch it. I didn't have to purchase expensive curriculum materials, or spend hours drilling information into him. He just soaked it up because it was fun and interesting to him. The same thing happened with the alphabet. His very first obsession was with signs. Street signs, all kinds of them, but most of all - stop signs. A little before he was 2 years old, everywhere we went, he began noticing stop signs. We were reprogramming our new tv, and there was a blue button on the menu screen to "stop" programming. Max pointed at it and said, "Op." (which is how he pronounced the word at the time.) We were so blown away that he recognized the word outside of the bright red hexagon symbol. After that, whenever we saw a stop sign, I would point to each letter and say, "Ess - Tee - Oh - Pee." He picked that up pretty quickly, and then he realized the other letters must have names too. He kept asking me to identify letters on things and he wanted me to read Dr. Seuss's ABC book to him every night. By about 27 months he knew each letter of the alphabet, even in random order. Again, he soaked all of this information up with very little effort on my part.
I have done a lot of reading on different styles of homeschooling - and there are many - but I think I am leaning toward a less formal, eclectic, almost-but-not-quite-unschooling, style. Probably with a lot of use of "unit study", which is a method where you tie in all subjects to whatever the child's current passion is. I don't really see us having a fixed "first day of school" where we begin homeschooling, but rather I see it as more of a continuing lifestyle. In many ways, we are already homeschooling right now. It's just a natural progression - he's learned how to walk, talk, feed himself, get dressed, use the potty, etc., and now he's learning how to read, how to tell time, identify types of train cars, species of dinosaurs, etc. I just pay attention to what he's into, and facilitate the expansion of those interests with toys, games, books, videos, field trips, etc. I don't really feel pressured to re-create the "classroom" environment at home - isn't that why I'm choosing to homeschool?
at 10:11 PM 0 comments