The summer has flown by and fall is nearly here.  Our feathered companions have been great company and have provided a constant stream of learning opportunities as we've watched them continue to grow and develop.  Here are a couple pics of the flock which were taken about a month ago. 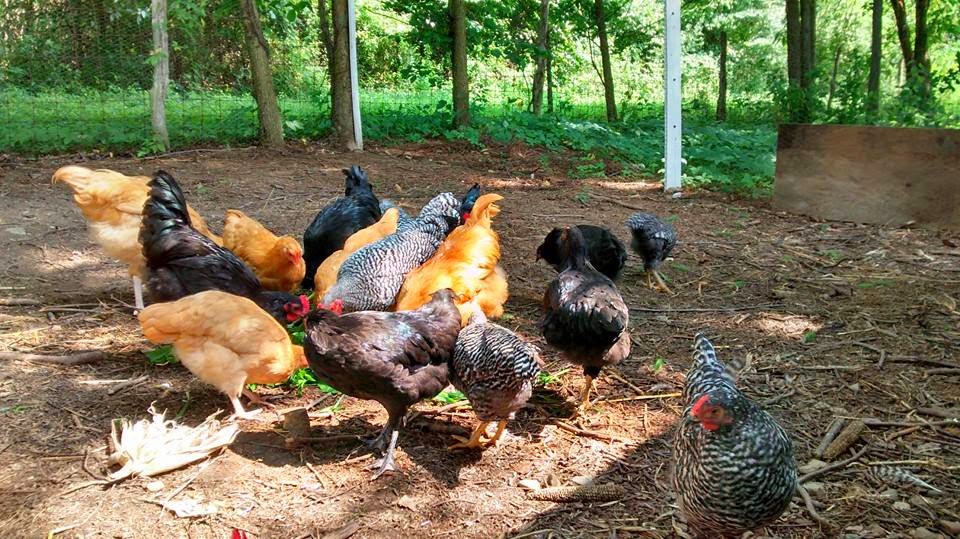 Monkey thinks the chickens are kinda cool, but Bug is a bit obsessed with them.  We often refer to him as the chicken whisperer.  He loves to hang out with them and cuddle them and giggle at their antics and give them treats.  He is completely comfortable around them and utterly fearless. 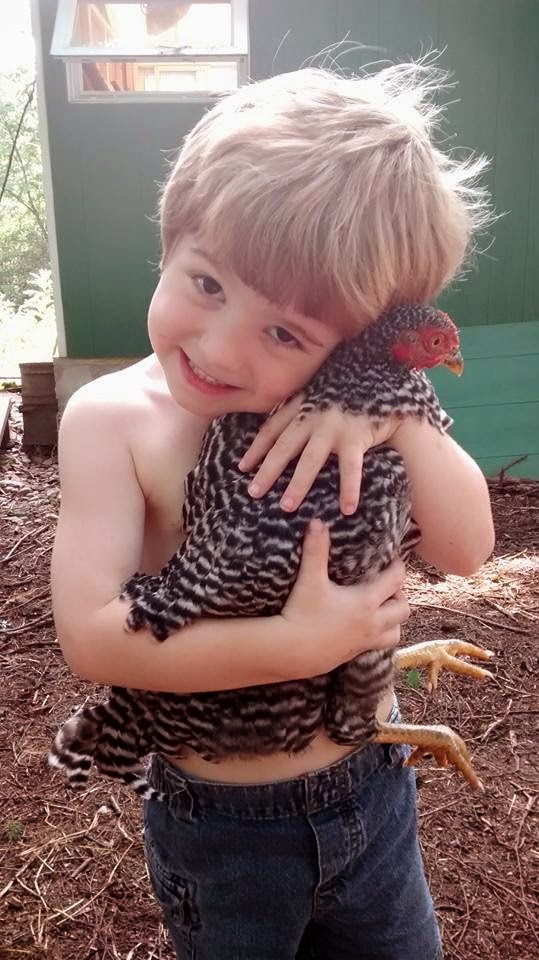 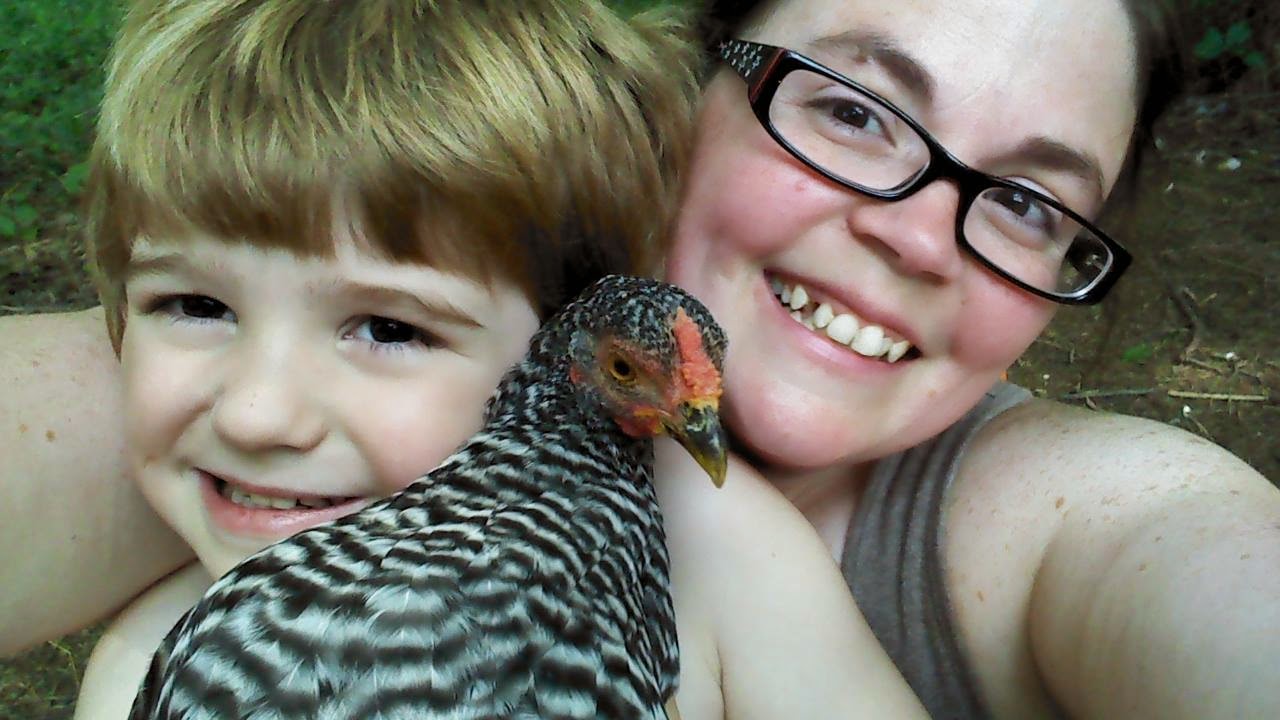 Oh, and he wants to BE one for halloween.  The first element of his costume arrived the other day.  (Thank you, Amazon!) 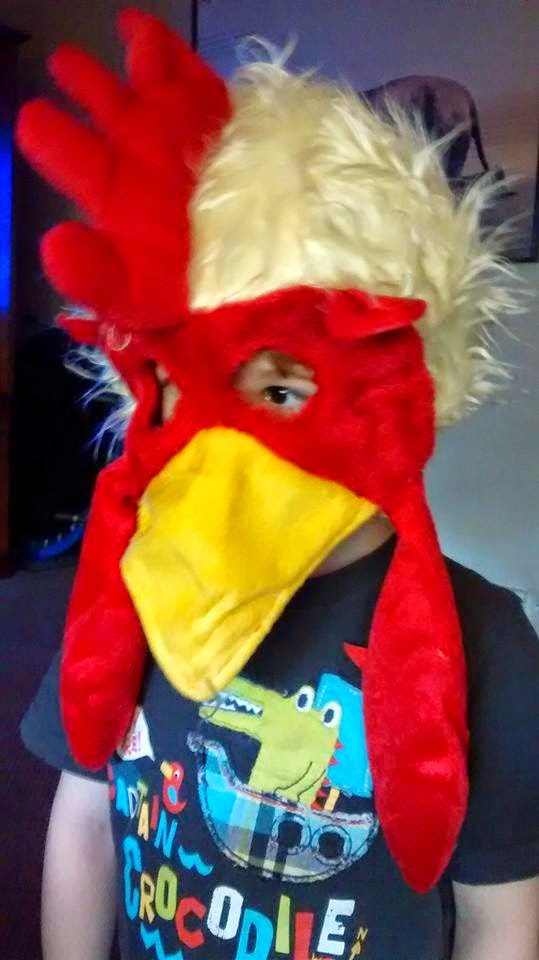 In the past week, we have experienced two big firsts.  I had been eagerly awaiting the arrival of the first egg and had been searching the internet for information about how you could tell when your chickens were about to start laying.  Most sites said around 4 to 6 months, and a couple places said the average age was 20 weeks.  So I counted off 20 weeks from the day we picked up our newly-hatched chicks (Wednesday, April 23rd) and I wrote on the calendar on Wednesday, September 10th "Chickens are 20 weeks" and watched the date get closer and began checking the nest boxes each day.  Low and behold, right on September 10th - the first egg appeared!  And it was a Big Event for our household.  Both kids had to pose for pictures with the egg. 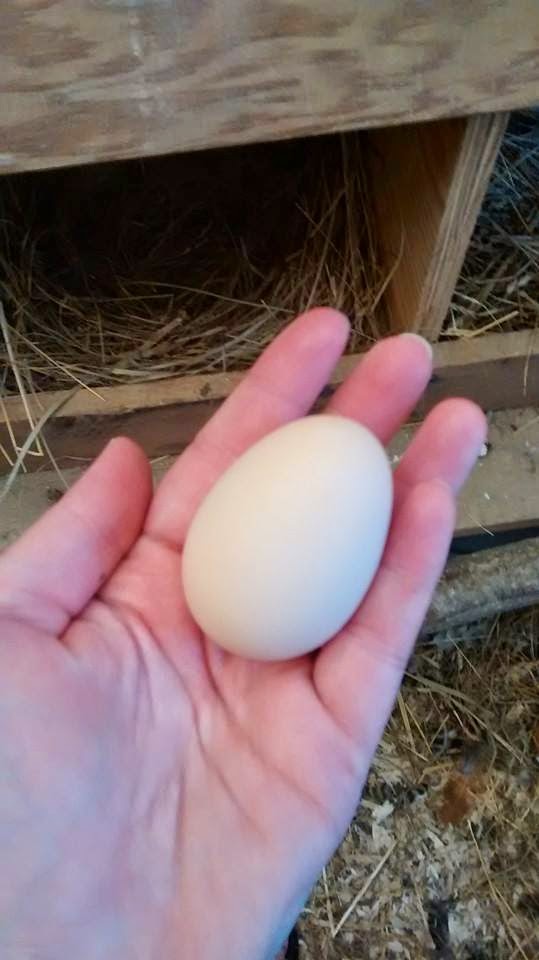 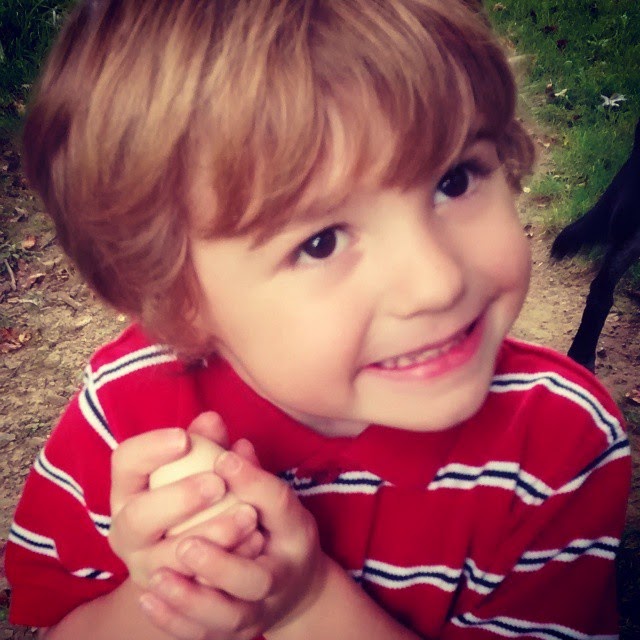 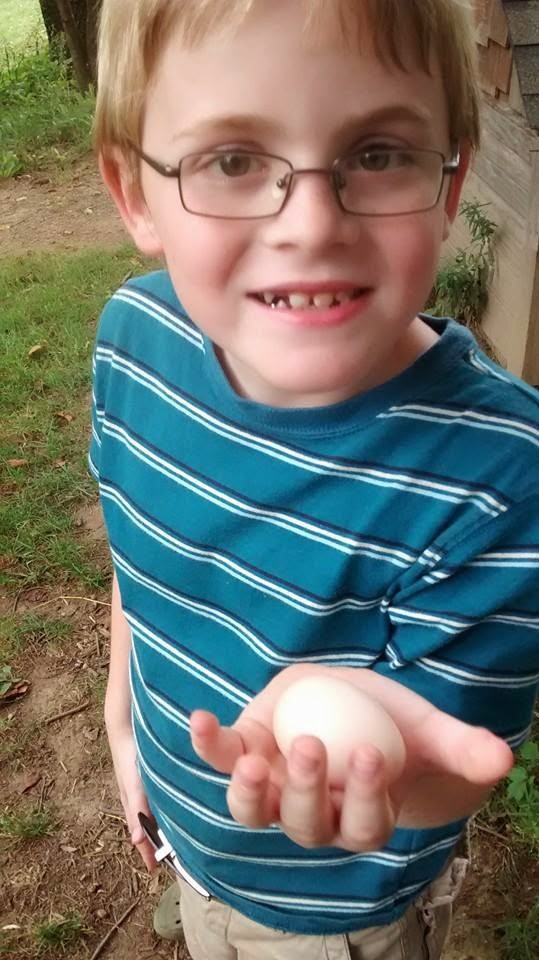 I'll never forget when Bug exclaimed, "I'm so proud of you, chickens!  Great job!"  I was just as excited as a little kid too.  I did refrain from taking an egg selfie though.  That same day we had taken one of the hens to our homeschool co-op with us for Bug's Preschool/Kindergarten Animal Study class.  He was so excited to share his chicken with everyone and she was a big hit.  Everyone was amazed at how relaxed and friendly she was, and I gave Bug all the credit for socializing our birds so well.  I was a little bummed that we didn't end up taking the hen who laid the egg though, because she would have ended up laying it while we were there!

Even more exciting, this morning, Shane ate that first egg for breakfast and texted me this pic:

Today we received egg #2 and I could tell its arrival was imminent because the hen was definitely singing the "egg-laying song" which is something else I came across in my internet research.  (There are plenty of YouTube videos of it if you're curious.)  It's basically just some very loud clucking: bawk bawk bawk bawk BA-GAWK! with the pattern repeated over and over.  If the song had lyrics I am pretty sure they would be "What's coming out of my BUTT?!  What's coming out of my BUTT?!"  It's rather comical.

Anyway, I mentioned above that we had two firsts this week.  The other first involves an intentional decrease in our rooster population.  Shane converted two of them to food.


The kids and I went elsewhere and he and a friend took care of business.  I have not gotten a lot of details from him on the process (and that's ok!), but he was committed to learning how to do it, from a self-sufficiency standpoint, although I gather that he definitely did not enjoy it.  We still have four more roosters to eliminate and I know he is not looking forward to it.  My parents offered to take them to a livestock auction instead and we may take them up on their offer.  Not sure yet.  We haven't eaten the two he killed yet and while it seems very strange to have two creatures who were recently walking around my backyard, now inside my freezer, I am curious to see if I can taste a difference in fresh, organic-fed, cage-free chicken that we raised ourselves, compared to what comes from the grocery store.  Will let you know...