I recently finished Misquoting Jesus: The Story Behind Who Changed the Bible and Why by Bart Ehrman. 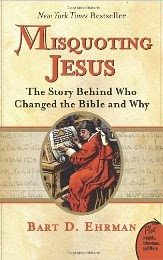 It's a fascinating and eye-opening account of the history of the New Testament and the study of the oldest, "nearest-to-original" copies of biblical manuscripts in existence. The big news (which isn't really news) is that we don't have any original copies of the Bible. Or copies of the original. Or copies of copies of copies of copies of the original... and so on... you get the idea. The very oldest manuscripts of the New Testament are from hundreds of years after the death of Jesus, and many of those are only fragments. Also, obviously, this was all done way before the printing press came along, so they were copied by hand. Ehrman describes how in the early days of Christianity, there weren't even professional scribes copying the books of the bible, just whoever happened to be the most literate people in a given congregation. So handwritten copies, by non-professionals, over hundreds of years = less than perfect results. Ehrman explains the detective work of how scholars study ancient manuscripts, looking for differences and then trying to determine which copy is the original, and also how and why the changes were made. Some instances were just mistakes, some were where the scribe thought there had been a mistake and tried to correct it, and some were where the text was changed on purpose to support the writer's and/or church's beliefs. It may sound kind of dry, but it was really quite interesting and educational, and it kept me turning the pages. I highly recommend it, whether you're religious or not. (Disclaimer: I am not religious, although I am interested in learning about all different religions, and plan to study them all with the boys in the process of homeschooling.)
at 4:27 PM