Max learned the alphabet when he was 2, thanks to his obsession with stop signs and other traffic signs. He first learned "S-T-O-P" and then badgered us to identify any other letters he came across until he knew them all. He then gradually learned both his lower-case letters and all of the sounds each letter makes from "Dr. Seuss's ABC Book". It's a fun read with a nice cadence to it that he really likes. I highly recommend it. 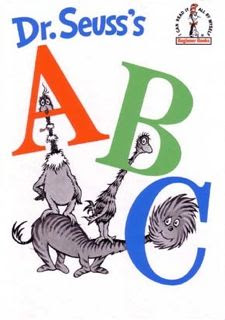 One day while Max was in the tub, I started writing some three-letter words on the shower walls with bathtub crayons. I told him to make the sounds of each letter and put the sounds together, and voila, he was sounding out words. It was such an amazing thing to see the "light turning on" as he figured out each one: "Kkh...Ah...Tuh... CAT!!!" It was a fun game for him, and he loved it. This picture was taken about a year ago: 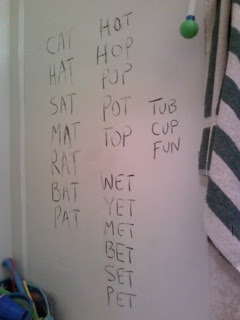 For the past few months, we would occasionally play a simple game at random times; at the breakfast table, in the car, etc. I would just give him a letter from the alphabet and ask him to tell me some words that started with that letter. He got good at it pretty quick. Sometimes, out of the blue, he would say a word and then tell me what letter it started with. For example, "Hey Mom - Bug starts with the letter B!"

Finally this week he showed some interest in figuring out whole sentences. When we were reading before bed the other night, he was making me read slowly and point out each word, and then he would point at each one and repeat. Then, a couple days ago, the big milestone happened: Max read his first book all by himself! It was "Mat", the first book of a "BOB Books" set. (Beginning Readers Set One) Each set is a series of twelve short, simple books that help kids get comfortable with reading - their confidence grows when they discover that they are able to read an entire book all by themselves. The books then get progressively more difficult as the child moves through the series. I have seen them on many "recommended" lists, and I must agree that I'm a fan now too. It was such a joy to hear my child reading and being so excited about it! 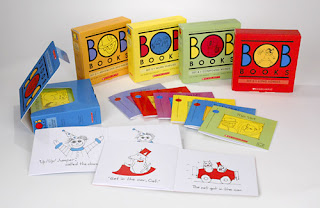 This process has definitely helped me grow more confident in my ability to teach my kids at home. I am successfully teaching my son to read! That is so huge. Max is like a sponge, constantly soaking up information, and it has truly not felt like "work" on my part at all. The key is that he learns like crazy when he is both ready and interested. My job is just to figure out what he's ready for and what he's interested in, and provide resources and guidance in that direction. I am so thankful to be able to do this - I feel like I would really be missing out if I had to hand him over to someone else instead of getting to share in this amazing process every day.
at 2:02 AM