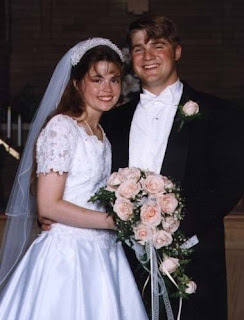 Today is our 15th wedding anniversary! And this fall we will actually have been together for 20 years.... which is pretty wild considering that we are both in our 30s. AND - we still LIKE each other! We aren't perfect but we do have a happy and strong marriage, so I thought I'd share some advice, for anyone who's interested:

1. Be nice to each other. Yeah, it really is that simple. Be kind and considerate to each other. Treat each other with respect. Do little things to make the other person's day easier.
2. It shouldn't feel like work. People are going to disagree with me on this one, but whenever I hear someone say that "relationships are hard work" I really think they are wrong. It has never felt like "work" to be with my husband. Work should feel like work. Marriage should (mostly) feel like taking a break.
3. Do your own thing. It is perfectly okay to have your own interests and be independent people. That's what works for us anyway. Being married doesn't mean you must be joined at the hip. If you each do different stuff sometimes, then you'll have interesting things to talk about later.
4. Be faithful and honest. If you can't trust each other, what's the point?
5. Don't sweat the small stuff. I have known a lot of couples who argue over the tiniest little things. Ask yourself, "In the cosmic scheme of things, is this really a big deal?" Seriously - just relax.
6. Thank each other often. This could really fit under the "be nice to each other" heading, but I honestly think that frequently saying "Thank you" is just as important as saying "I love you." It takes very little effort to acknowledge and appreciate the other person's efforts. I thank Shane all the time for getting up and going to work so that I can stay home with our babies, and also for little things he does around the house. He thanks me often too.
7. Be friends, and be a team. Whenever I see something interesting or funny, my first thought is usually, "I gotta tell Shane about that." He's my best friend, and we still have great discussions about stuff. I love that he calls me in the middle of the day to tell me (read: rant) about something he heard on the radio... even after all these years, he still calls me. Also, all of our stuff is our stuff (not mine or his), all of our bills are our bills, all big decisions are made together. We are a united team - it's us vs. the world.
8. Laugh! For us anyway, one of our main lines of communication is humor. Even when one of us is bothered by something, we usually find a way to joke about it and get the point across in a lighthearted manner. Also, the more private codes and inside jokes you have, the better.
9. Sex. Okay, I'm a pretty private person and this is something I don't discuss with other people much. I'll just say - I think it's a good idea to marry someone you like having sex with. There, now I'm blushing.
10. Don't give up too easily... BUT if the relationship is really bad, and you're truly miserable, then it's okay to move on. I really think that people sometimes just give up way too easily these days, and it makes me very sad when I hear that a couple is splitting up. The best marriage advice I ever heard was when I asked an elderly couple from my parents' church what was their secret to being together for so many years, and they replied, "You just stay together. That's it." Simple but profound. That being said, I also see people who are truly, deeply unhappy, with irreparably bad marriages, who stay together anyway - out of convenience, for the kids, for fear of being alone, whatever. I do NOT get this. Life is too short to spend huge chunks of it being miserable. (And being in that kind of atmosphere is not good for the kids either, so that's a bad reason to stay.) You deserve to be happy. It is okay to let go and move on if you're in the wrong place. Especially if someone is abusive - either mentally or physically - do not walk but RUN away! Being alone is infinitely preferable to being with a jerk.

So, there you go. My two cents on marriage. I am really so grateful for everything that we have - we may not have a lot of money, but we are very, very rich in ways that matter more. I am often pleasantly surprised by how we have grown more alike over the years, instead of apart as some people do, especially couples who got married as young as we did (I was 19, he was 21). One of the best things about our marriage right now is the way we are totally on the same page in the parenting department. It means so much to me that Shane is 100% on board with this homeschooling lifestyle we have chosen. Hmm... one more thing for that list: pick the right person to marry in the first place. Fortunately for me - I did. :)