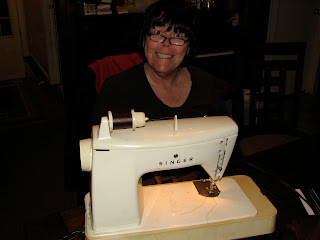 This is my mom.  She came over earlier this week to teach me Sewing 101 and help me make make a cloak for Monkeyman's Jedi costume. 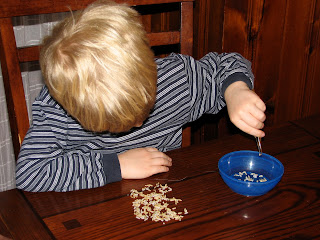 While we were working, Monkeyman was pretty wound up ('Cause Grandma was here!) and I came up with a great way to keep him occupied.  When he picked up a pair of tweezers and asked me how they worked, I showed him how to hold them and had him pick up a crumb off the table... then I had a "lightbulb over my head" moment and quickly grabbed a handful of rice and a bowl, and told him to practice picking up the grains of rice and putting them into the bowl.  He was focused so intently on this that it kept him busy until we were finished!  I am definitely going to try letting him do this sometime when I am reading to him and see if it helps his attention span last longer. 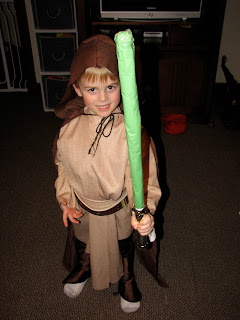 Ta-da!  Monkeyman is modeling his finished cape with the rest of his costume. 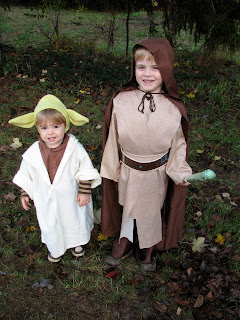 And here are my boys about to go trick-or-treating!  It had rained all day but the sun came out right before T-or-T started, so we got to go after all.  Little Bug did a couple houses and was over it pretty quickly, but Monkeyman had a blast. 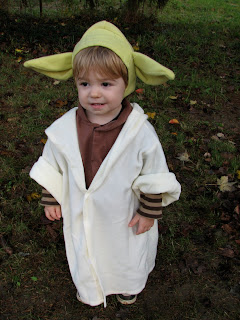 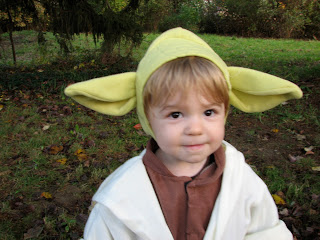 Adorable I am, yes?

One of my favorite things about Halloween is checking out all of the other creative costumes out there when we are Trick-or-Treating.  This year's best were:  the Stay-Puft Marshmallow man from Ghostbusters, a girl who was a basket of laundry, a group of kids who were three gorillas and a banana, and this little girl who was wearing the most beautiful handmade owl costume.  It was amazing.