Yesterday we went to yet another MetroPark program. This one was all about compasses and orienteering. It was really interesting and very well put together, and the naturalist who led the class was great. The extent of my knowledge of compasses was that the needle points North, but I had never learned what to actually do with one. 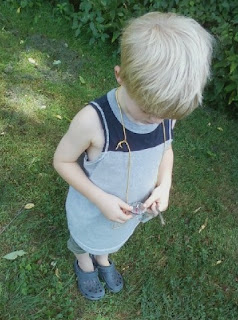 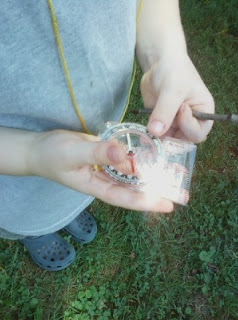 First, the guide handed out compasses for everyone and taught us the basics of using them. Then we were off on a scavenger hunt. She'd give us the heading and we had to figure out which direction to go in and pick a fixed object to walk toward, and then she'd tell us how many paces to go and we all walked and counted out loud together. The scavenger hunt included several different canisters containing clues indicating what kind of animal lived in the particular area where we were. I thought Max would really like this but unfortunately he was not nearly as into it as I was. (BTW, this brings me to one selfish reason for why I have chosen homeschooling - I love to learn stuff & am totally psyched about learning things along with the kids.) I think it was a combination of factors - it was pretty hot out, and the pace of the class was just a bit slow for him. He quickly started to get bored and wander off to look at other things. I was doing okay with just accepting that this wasn't something he was ready for yet, and I figured at least he was out enjoying nature; he observed turtles, fish, a couple great blue herons, and was especially fascinated by all of the dragonflies. As the program was nearing the end, I was starting to get frustrated with him because he had wandered way ahead and was refusing to stay with the group and listen to the guide. So I turned in our compass and we left. I was disappointed, thinking that he hadn't gotten anything out of the class. On the way home, he looked up at the van's digital compass and said, "Hey Mom, we're going West." (!!!) He was right, the "W" was lit up. When we turned onto another road and changed direction, he said, "Oh look! Now we're going South!" Right again. My frustration vanished and I started laughing... I guess he did get a little bit out of it after all!
at 9:42 AM

Email ThisBlogThis!Share to TwitterShare to FacebookShare to Pinterest
Labels: Curriculum or lack thereof, how, learning moments, metroparks, science, why