Random tidbits from my day...

So I'm kind of an atypical homeschooler. Besides the other stuff I've talked about, I also generally hate cooking and detest gardening. But I DO like making my own bread from time to time (it's practially a law that you must do this if you're a homeschooler), so I did that today. It was an enormously exhausting amount of work to dump those ingredients into the bread machine, but I did it. Whew! *wipes brow* 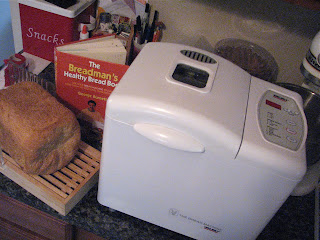 Ta-da! Be very jealous, because this bread is super yummy and my house smells SO good! I used my favorite recipe out of my beloved bread machine cookbook which I discovered at a used bookstore for $4. Here 'tis (adapted for a 2 lb loaf):

Instructions:
Dump the stuff in the machine, in the order listed. Turn on machine (basic 2 lb setting). Go do other stuff for about 3 hours. Take bread out & let cool. Eat bread.

This type of cooking is just perfect for my skill level and attention span. Actually that's my real problem with cooking; I get bored waiting for things to cook so I go do something else to kill time and then forget I was cooking. I could probably do a whole other blog called "Sh*t I've ruined in the kitchen" or something to that effect.

Another cool thing that happened today was that we met this guy while we were out cruisin' around: 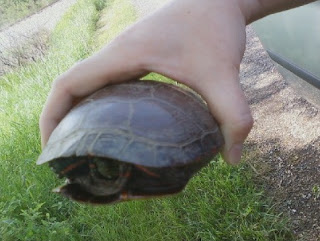 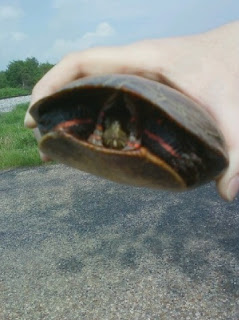 He was strolling across the road, and being that we're homeschoolers, and on no one's schedule but our own, we were able to take the time to stop and rescue him from the fate of becoming a turtle pancake. I brought him over to the van to let Max see him up close, and he was fascinated. He noticed the plates on the top of its shell and gingerly felt them as well as the smooth underside. (Don't worry, I made sure he stayed clear of the head area, lest his poor little digits become turtle treats.) He checked out how its legs were all tucked in and also noticed the long "fingernails" and was very respectful of them. For a moment I was tempted to bring Mr. Turtle home, but we don't have anywhere to keep him, plus it just seems mean to capture a wild creature to turn it into a pet - and he'd already had enough stress for one day, wondering if these weird, pale two-legged monsters were gonna eat him. Once we completed our turtle inspection, I gently placed him in the weeds far off the side of the road. 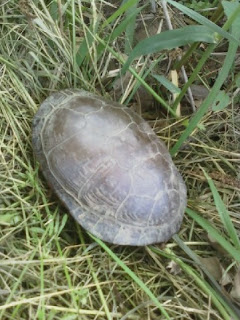 Bye Mister Turtle! Nice to meetcha! Now stay away from the roads ok? I definitely see some more in-depth turtle studies in our near future...

Oh yeah - moments before we discovered the turtle, a deer had jumped out in front of us and ran in a straight line up the road ahead of us. I slowed down to keep a safe distance and we followed him for a few moments before he zigged... then zagged... then did one of those graceful, slow-motion-looking leaps they do, and disappeared into the brush. I have a thing for deer - I just love when I get to have a peek at one! It constantly amazes me that such large animals live so closely among us yet stay nearly invisible most of the time.

Finally we passed a guy walking along the side of the road with a red bandanna on his head. Naturally, Max decided he must be a pirate. When we got home, he excitedly told Daddy, "DAD! We saw a DEER and a TURTLE and a TRAIN (yeah we saw one of those too) and a PIRATE today!!!" Many people think we live in a boring little small town, but they have no idea how exciting this place really is!
at 11:34 PM