Ok, I've been meaning to write about this for days. I was signed up to go to the annual homeschooling convention in Cincinnati at the beginning of April, but unfortunately my trip was cancelled due to my grandmother's passing. So instead, I went on a bit of an online shopping spree with the bit of money I had saved up to spend on, and during, the trip. My favorite homeschool supply site so far is called timberdoodle.com. They have such a great selection of interesting things, and to my surprise, their prices were better than Amazon's on every single thing I compared. Even for those who are not homeschooling - check out this site for some great, unusual, fun stuff! I have decided not to purchase any official pre-packaged curriculum (well, ok, just one - more on that below), rather, just an assortment of books, toys, and games that I think Max will enjoy and be interested in. I plan to use "real" books instead of textbooks as much as possible. So here's my loot. Many, but not all of these items came from Timberdoodle. 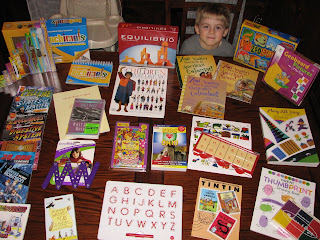 And, to highlight a few favorites so far: 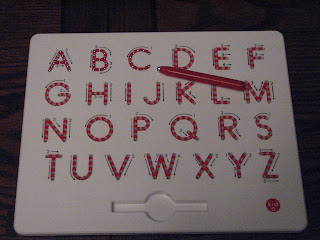 This is a toy that encourages kids to practice writing movements. It has tiny magnetic balls inside it (don't worry, they can't come out) and when you run the magnetic stylus over the letters, the balls audibly snap into place. To "erase" all you do is run your finger back over the letters to pop the balls back down. As Max is a kinesthetic (aka hands-on) learner, the tactile sensations are perfect for him. He loves it already. Actually, so do I - we have had a few arguments over whose turn it is to play with it! 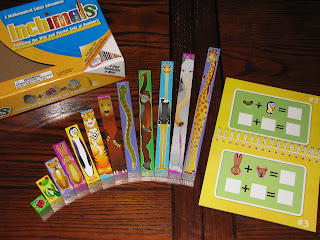 These are called Inchimals. They are wooden blocks ranging from 1 inch to 12 inches, with animals painted on two sides, and inch marks on the other two sides. They are great for teaching all kinds of mathematical concepts, like measuring, comparing, ordering, adding, subtracting, etc. They also come with a spiral-bound dry erase notebook with problems of gradually increasing difficulty. Again, a great hands-on tool for my hands-on learner.
*The one curriculum I do plan to buy is called Math-U-See, which has manipulatives similar to this concept, but goes to much more advanced levels. (More on that at a future date.) 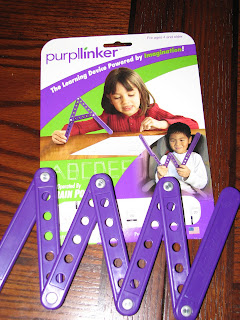 This is a simple little thing, but I think it will be a really useful tool. I plan to do a lot of reading aloud to Max, and while I am doing that, he will likely need to have something to keep his hands busy. Purpllinker is similar to a carpenter's ruler, and can be bent and folded into many different shapes, such as letters, numbers, shapes, or possibly illustrating elements of what whatever story I happen to be reading. Another great tactile tool. 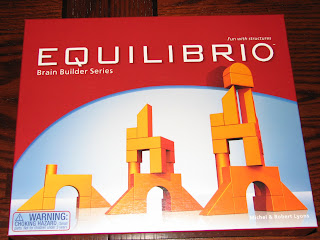 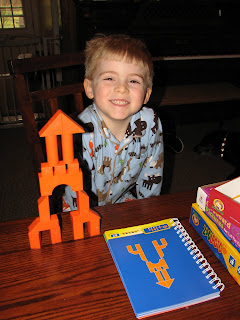 Finally, I had to mention this game. Equilibrio is one of those "simple to learn, difficult to master" kind of games. There is a spiral bound book with pictures of structures to be copied with the solid plastic blocks; the structures gradually increase in complexity. Max enthusiastically played with it from the minute we took it out of the box from the UPS man, for a good 45 minutes or so. Here he is proudly displaying a tower he built. Although it is really fun, it actually teaches construction, geometry, logical analysis, perspectives, design, and spatial logic.

I'll write more about some of the other items in the top picture later. Also, in my next post, I will be writing about the curriculum sale I went to a couple nights ago at a local homeschooling co-op - the first function of theirs I attended.
at 2:30 PM

Email ThisBlogThis!Share to TwitterShare to FacebookShare to Pinterest
Labels: Curriculum or lack thereof, how, product reviews