How I motivate my 5-year-old

This is Max's chore chart. I found it at an office supply store a year or so ago. For every task he completes without me having to ask, he gets a star. 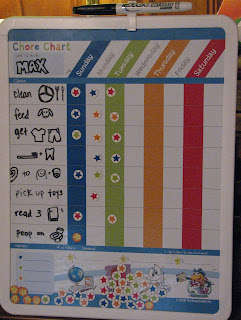 If you can't understand my illustrations, the items on the list are:
The first four are pretty self explanatory. "Listen to Mom & Dad is kind of an arbitrary one for me - I award it for general good behavior and cooperation, and the absence of whining and arguing. I sometimes award him the "Pick up toys" star for any act of spontaneous cleaning, such as sweeping or dusting. "Poop on potty" was the magical solution to the problem of his resisting going #2 until he could no longer contain it, and then having an accident. Nothing we did or said or offered him would get him to do it. Finally I added it to the chart and voila! Problem solved. What's great about this chart is that it motivates him to think about what he needs to do, and get it done, without me having to badger him. Also it's great because the categories are dry-erase, so I can change them to tasks of increasing complexity as needed.

Now Max has a passion for video games - especially ones in the Mario Bros. family. He is not allowed to play any games until he has earned at least five stars each day, and then he can play for an hour. (Ok, I'm not gonna lie, I do sometimes let him play a little bit longer when I get busy doing household chores or need a few moments of "me" time - sue me!) Recently he had been wanting a particular new game for the Wii, and I decided that he should start earning them himself, so I started awarding him 10 cents for each star he earns. As soon as I started doing that, he was on fire to earn those stars every day! Last week he met his first goal of saving up $20 for the new game he wanted - it had taken him about a month. I exchanged all of his coins for a twenty dollar bill, and we were off to the store. Here he is proudly displaying the first $20 he ever earned: 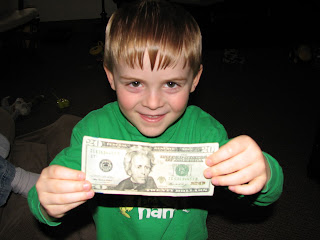 He tightly clutched his money all the way there, and once we located the game, he took it to the counter and handed the man his money. It was a very exciting and memorable experience for him - he was quite proud of himself!

I have heard arguments against giving kids allowance or other monetary incentives, but I think this is a great learning opportunity. I have a part time job. I don't go there for fun, although I do believe it's important to like one's job, but I go for the paycheck. I want my kids to have a strong work ethic and understand that if you want something, you work for it, and you earn it. I think this is a quality severely lacking in our society today.
at 12:51 PM