One day back in early May, we decided to explore Portage Lakes State Park.  I had been there years ago, back in my younger days, but I was not very familiar with the park and I had never taken the kids there - which is odd because it's so close to us.


First, we decided to hike the Planet Walk Trail.  The Astronomy Club of Akron has a small observatory at the park where they have occasional programs for the public - which (sadly and surprisingly) I've never attended although I did join the ACA and went to their monthly meetings for a couple of years with my stepdad, around when we built our telescope about a decade ago.  The Planet Walk Trail starts at the observatory and meanders off through the woods.  There are signs posted along the trail, marking the relative location of the planets at the scale of one mile.  This seemed like a pretty cool idea, although the trail is not as clearly marked as I would have liked - we got off course twice and we never did find Neptune at all.  The trail just dead ended at a residential street and there was no indication of which way the trail may have continued on, or if it did at all, so we turned back. 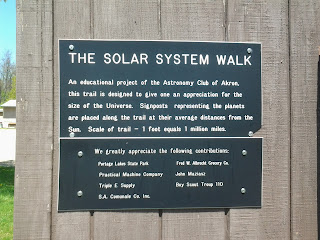 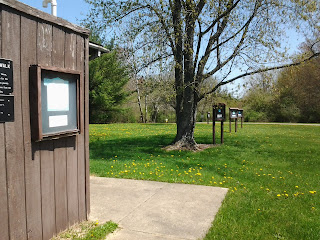 When we finished our walk, we were ready to leave, but on a whim I decided to drive around the park first and check it out.  We came to a huge parking lot (note to self: would be a good spot to bring the bikes & scooters) and found a nice beach next to a great playground area.  I did not get any shots of the playground but I did take some of the kids playing in the water.  We hadn't come prepared to swim (the water was still awfully cold!) but that didn't stop the boys from having "the best day ever!" in the words of Monkey. 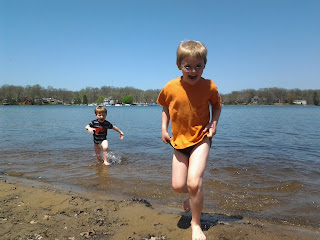 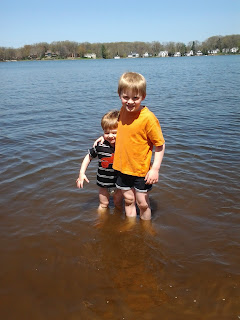 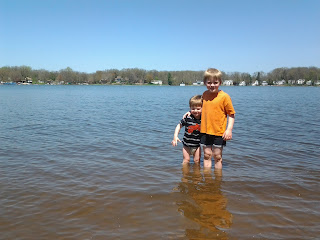 While we were playing, a staff photographer from the Akron Beacon Journal approached us and asked if she could take some photos of the boys playing.  I gave her my permission and our names, and she took shots of them for a little while.  I bought a paper every day for a week after that, but they never made it in.  Oh well!
at 10:22 AM