Here's another crusty old post that had been sitting in my drafts folder forever and got forgotten when I was catching up awhile back...

So, waaaaaay back in March, Monkey and I went on sort of a "date", just the two of us, to an annual concert called MonsterPianos at E.J. Thomas Performing Arts Hall.  It featured "Eight 9-foot grand pianos, with as many as 24 pianists playing simultaneously."  I thought he'd either be totally into it, or he'd get bored and not be able to sit through the whole concert, in which case we'd just leave early.  He loves music and I wanted to at least give him a chance to be exposed to something cool, but I was prepared to go with Plan B if it wasn't his thing.  He liked the music, but got pretty squirmy and chatty before it was quite halfway over... so in consideration of the other concertgoers, we left.  The trip was NOT a bust though!  We ended up exploring the concert hall, inside and out, and we had a blast!  First, we wandered around and counted the huge counterweights that hold up the adjustable acoustic ceiling tiles inside the auditorium.  Yup, there were 27, just like the info section in our program said. 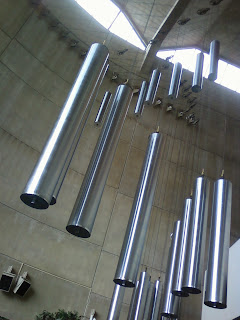 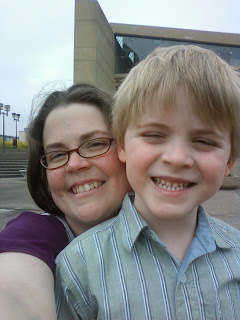 Next, we headed outside and explored the surrounding areas.  Since we live out in the country, walking along the streets in the "big city" was kind of a special treat.  We heard a train passing nearby and sprinted over to a bridge to get a look at it, and watched while it passed directly underneath us.  Then we walked over to examine an interesting and unique sculpture that I'd only seen from a distance...

There were a few smaller sculptures in the area which I had never noticed before, even though I'd driven past them many times.  We checked them out, and then came across a group of musicians practicing just outside the building next door to the concert hall and we listened to them for a few minutes.  Finally, we meandered back to our car in the parking deck, and then headed to get a bite to eat at Swenson's (if you ever come to the Akron, Ohio area, you MUST go there.) before going home.

This outing could have easily ended badly... at first, I was disappointed to be leaving the show early, but it was a case of having realistic expectations for a 6-year-old boy.  I went in knowing that we might not make it through the whole show, and that was okay.  Our explorations afterward made the trip totally worth it.
at 8:00 PM