Local and natural history at the Gorge Metro Park

Last weekend, we went on a guided hike at the Gorge Metro Park in Cuyahoga Falls, OH.  We've been to this park before, but this time we were on a different trail.  Our friend P. came along with us again, but little Bug stayed home with Daddy due to both the cold and the slight danger factor of this particular trail.  The description of the hike was as follows:

"FOOTSTEPS TO THE PAST.  Years ago, a favorite spot for locals was Fern Cave near the High Bridge Glens.  But what is a glen and where is Fern Cave?  Join Naturalist Dave Brumfield to find out and learn about Gorge Metro Park's geology and history."

My only criticism is that I went on the hike hoping that we were going to get to see Fern Cave - which I had never heard of - and it was barely mentioned and was nowhere near the area where we were hiking, so we did not get to see it.  That being said, it was still an excellent hike.  Although we had bundled up pretty well, I was still worried that the kids were going to get cold, but they were fine and so was I.  The weather was actually quite pleasant - chilly but sunny, and it was good for all of us to get out and get some much-needed fresh air.  This trail is one of the park system's most scenic ones, with lots of large, exposed rock faces and lovely views of the Cuyahoga River and the huge waterfall at the dam.  The Naturalist stopped us occasionally to talk about the history of specific places along the trail: both natural history such as the gorge being carved by glaciers and the river, and local history such as the dance hall and amusement park that used to be located here.  He also passed around some old pictures showing how the area used to look, but I was busy with the boys and didn't get to see many of them. 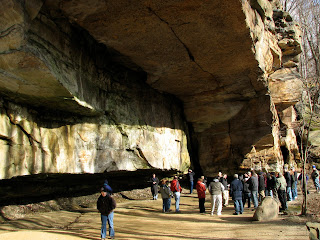 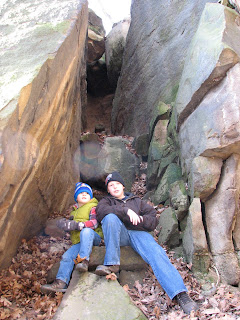 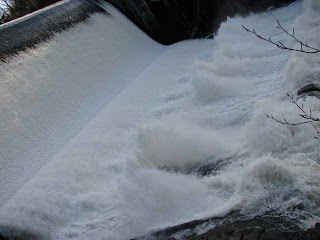 Overall it was a great excursion, and although I might have found the history lectures a tad more interesting than the boys did, they still thought it was a pretty neat place.  Afterward I chatted with the Naturalist for a few minutes and he was very friendly and knowledgeable.  When I told him we were homeschoolers, he said, "Oh!  In that case - here you go!" and gave the boys some Wild Ohio for Kids nature magazines.  He said that he and his wife had homeschooled two of their four kids so he was very supportive, which was nice.  When I asked if they ever did any events about fossil hunting, or fossils which had been found in the area (which I think Monkeyman would dig, haha) he said no, he didn't know of any but that he would suggest it.