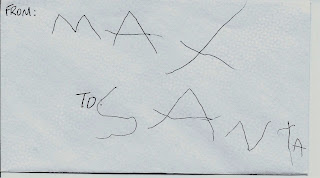 Today I helped Monkeyman write his first letter to Santa.  He dictated and I wrote:

I want a scooter, and I need a helmet and knee pads for it.  And I want a drum set.  Oh, and I want a dirtbike Wii game too.  I want a guitar.  I want my drum set to have cymbals.  Let me think some more.  I'm thinking about having a pet, like a little dog.  I can like Noodle and another dog too.  I want him to be white and brown and red and yellow.  And green.  I want a toy clock that's blue & yellow, with buttons on it.  I want it to be a cuckoo clock with a goose in it.  I want a new toy train to go on the train table on the porch.  A new hat that is red and yellow and blue.  You should give me all these things because I like you, and I like toys.  Also, I'd like my scooter to be red and yellow and blue and green.  So whenever we go to a park, I can have a scooter to ride on.  Also a toy computer with a whole bunch of games on it, with Legos on it.  Also a Lego forest with a whole bunch of guys that swing around on some ropes.  I think that's all.  Thank you.

PS.  My Mommy wrote this for me but I told her what to write.


This was exciting to me because it's kind of his first "writing exercise" and I thoroughly enjoyed seeing what he came up with.  I did try a few times to gently steer him away from all the "I wants" but he wasn't having any part of it, he just had to get his thoughts out.  (Ah well, he's five.  Maybe a bit more decorum next year?)  I think I'm going to come up with some prompts and have him dictate some stories for me, until he learns how to write fluently himself.  I've read about others using this method, and after this exercise, he seems to be ready for it.  It was fun for both of us, and he seemed quite pleased with himself for "writing" that whole long letter.  When he decided he was done, he signed his name and we put it into an envelope which he then "addressed."  I wanted to save it forever, but he is intent on giving it to the mailman tomorrow.  (I did scan it so I have a copy at least.)  Monkeyman was planning on standing out front and holding his hand up *makes a STOP gesture* to get the mailman to stop and take his letter.  However, I assured him that just sticking it in the mailbox and putting the flag up will get the job done just as well.  Gotta love the magic of Christmas!**


**Yes, I know I'm an Atheist, but I have to agree wholeheartedly with Leanna's recent post at Life on the Hill - I have always loved Christmas and I will always celebrate it.  I love sending cards, baking cookies, putting up the tree, decorating the house, driving around looking at Christmas lights, spending time with the people who matter most to me, and finding ways to show my appreciation and love for them.  I don't need to be a Christian to do any of that stuff.  Also, although it may seem like a contradiction to let my kids believe in Santa - it is only a temporary belief.  I think a little bit of magic is okay in childhood.  Some of my fondest early memories involve the wonder of Christmas and I don't think I ever felt damaged by eventually finding out the truth.  Actually, I think that realization may have played a part in helping me realize that certain other things weren't real either - much, much farther down the road...
at 10:49 PM