We went on a really cool field trip with our new homeschool group - a canal boat ride on the St. Helena III, in Canal Fulton, Ohio. 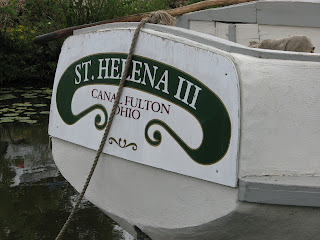 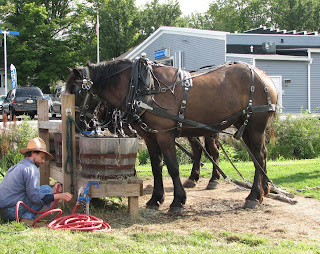 Fueling up. The man in the straw hat was the captain/ tour guide. He told us lots of interesting stuff about Ohio and local history as we cruised. 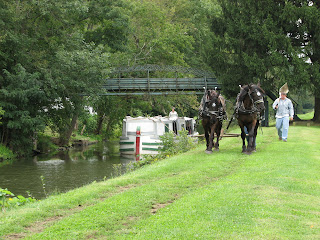 Here is the boat's "two-horsepower engine" pulling it along. 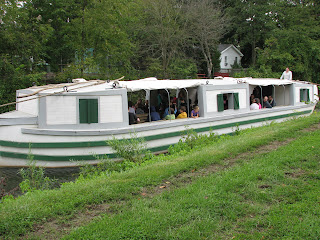 There were over 80 people in our group and we were divided in half and took turns between the boat ride & museum visit. So there were around 40 people on the boat at a time. 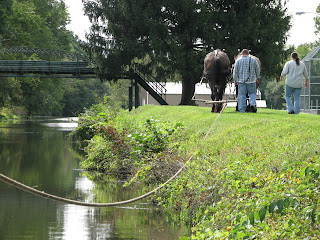 Here's a view of the horses pulling us along. 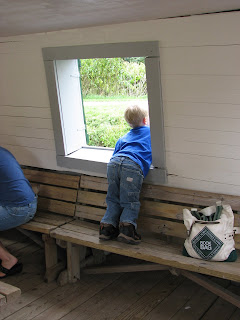 Monkeyman enjoyed watching out the window. 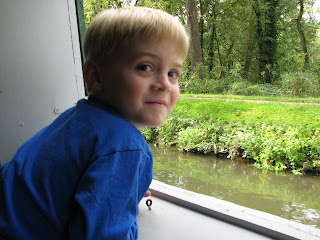 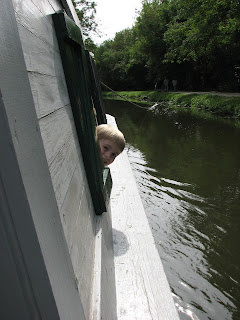 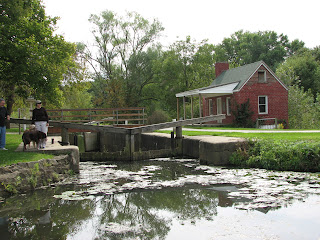 Here is Lock 4, the fourth lock south of Akron. This is where we turned around and headed back. (The boat ride was about an hour long altogether.) You can see that the nearer gate is closed and the far gate is open, and the water beyond is at a lower level. The brick building beside it was the lock tender's house. 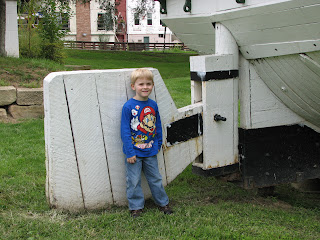 The St. Helena II, the current boat's predecessor, is parked nearby and the kids were able to climb up on it and play. Here's Monkeyman standing beside the rudder. 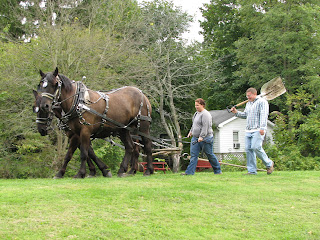 I think the guy with the giant shovel really makes the photo, LOL. 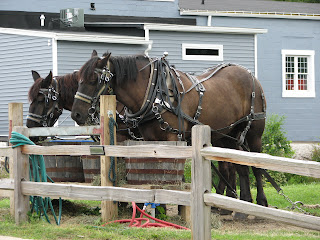 Refueling for the next trip.

The captain/tour guide did a really nice job of sharing information and making the ride interesting. He explained that before railways and cars and roads, canal boats were the primary means of transporting goods. He told us what life was like on a canal boat - how the captain and his (probably large) family lived in the tiny cabin at the end, and that the area where we were sitting would have been filled with cargo. He told about how each child in the family would be given jobs to do on the boat, and how family basically doubled as crew. He said that children as young as five (using Monkey as an example), paired with a knowledgeable older sibling, would be learning how to drive the horses along the side of the canal. He also brought out some examples of the kinds of toys children would have played with back then and let the kids try them out.

As we drifted, he pointed out many sights along the way, including a house that was a stop on the Underground Railroad, and told about how captains who were supportive to the cause would let slaves hide on the boat and then they'd stop or slow down at that house so the slaves could jump off there. They'd be given food and a place to stay and would then take another boat for the next leg up to Cleveland. He did a great job of painting a picture of the time and the local area; how the town sprung up as a direct result of the canal and what a booming place it once was.

After our boat ride, we saw a short film and then toured the small museum. It was interesting but didn't really hold Monkeyman's attention, which I kind of expected. After that, we had a quick picnic lunch and he played on the nearby playground with some of the other kids. All in all, a very good outing!
at 1:10 PM