Today was a beautiful, unseasonably warm, exceptionally blustery fall day. I took the kids outside to play, and while I was rocking on the swing with Emmett, I looked down and noticed a Wooly Bear caterpillar near my feet. I called Max over to show it to him, and he bent down to examine it closely and said, "Can I touch it?" and I said, "Sure." He very gently felt the furry caterpillar's back. Then, "Can I hold him in my hand?" "Yes but be very careful - he is delicate and you don't want to squish him." So Max very carefully and gently picked him up, causing him to curl into a ball. Max placed him in the middle of his palm and said in a soft voice, "Hi, my name is Max." He held still long enough that the caterpillar became brave enough to start moving again and investigate his surroundings. We observed his face, eyes, and many feet, and he was nice enough to leave a tiny green pellet of poop on Max's arm, which was interesting. He crawled up and down both of our arms for awhile, and we enjoyed the tickly feeling. Max asked me what caterpillars eat and I said, "Well, I have a hypothesis." (Max learned about hypotheses from the show Dinosaur Train.) "I think that since he has green poop, he probably eats things that are green, like plants. We can look it up on the computer and learn more." I remembered I had purchased a little bug house kit to keep on hand for just such an occasion, so I went in the house and got it and brought it outside. We put the little guy in it with some grass and mulch (Max's idea) and brought him in the house, Googled "Wooly Bear caterpillars" and confirmed my hypothesis. We also learned that they hatch from eggs, and we saw pictures of Wooly Bears and of the Isabella Tiger moths they turn into. Max then included the caterpillar in the rest of his activities for the day. When Dinosaur Train came on, he placed the bug house where it had a view of the tv so that the caterpillar could watch it with him. When Daddy came home, Max told him, "I have a new friend, Dad! It's a caterpillar!" When he ate dinner, he put the bug house beside his plate. He wanted to sleep with the bug house in his bed, but I was able to convince him it would be a better idea to put him on the nightstand instead. We will either set him free tomorrow, or maybe we'll do some more research and create a more sophisticated place for him to live and keep him thru the winter so we can watch him make a cocoon and become a moth in the spring. We'll see. 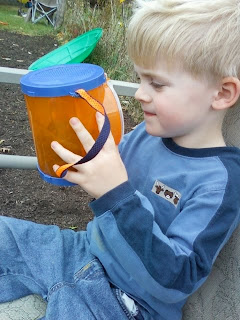 Email ThisBlogThis!Share to TwitterShare to FacebookShare to Pinterest
Labels: Curriculum or lack thereof, how, learning moments